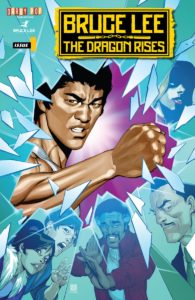 bandwagon. Yes he was Kato and I loved that but I wasn’t into Martial Arts when I was growing up. So if you are like me then great if not and you’re a big Bruce Lee fan, great news as well this is pretty much everybody there is! From the start we’re left wondering what’s going on and that bewilderment continues till the last page. It’s a good thing too folks trust me on this one.

This is a very modern, current story that has all the earmarks of not only a wonderful action/adventure story but swirled with a mystery and some science fiction to really give it that extra oomph. The characterization is incredibly well done and there’s just the right moments of humour added into this so that you get a sense of the difference between forty years ago and today in ways that while illuminating are also fun.

I have to say the way this story was crafted is excellent. Opening up with a natural disaster scenario that ultimately introduces us to not only the main character, yes Bruce Lee, but to his friends, supporting cast for this story and the bad guys well it doesn’t get any stronger than this. Plus not only are we, the reader, drawn in by the story itself but we also get drawn in by the concept behind the story. There’s science and technology at play here that either shouldn’t exist or can’t exist but still proves to be some of that thought provoking kind of stuff that makes this style of story ever plausible. 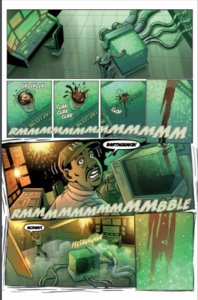 That this story is such a mixture of different styles is much like the man himself, he was a very versatile man with eclectic interests according to the documentary I watched. So not only do you get a sense of the man behind the mystique but we get to see how far we’ve come in forty years and it’s both a blessing and curse in many ways. There’s really no tongue in cheek happening here it’s pretty apropos to the characters, how they act, speak and behave and it’s one of the more solid and interesting portrayals of someone gone from the world too soon but who left a lasting legacy.

The interior artwork by Brandon and Zac is just perfect for me! It highlights all that is right with everything going on from the subtle to the overt and everything in between. The use of pages, panels and backgrounds to help the story flow and give a greater sense of scope to what’s going on is beautifully done. The faces, expressions and emotion coming off the characters really helps you relate to them better.

While I may not have been a huge of fan of the man in the past the present is another matter entirely. This is how you tell excellent stories and keep a man’s legacy alive, well and truly honoured.

Editor’s Note: Want to get in on the fun with some Bruce Lee? Then head here!

Summary: Bruce Lee never died. And he hasn’t aged. But, he has no idea who he is, what’s happened in the world in the past 40+ years, or why so many “thugs” want a piece of him. With the help of a fly BFF from the ’70s – Joe Toomey, P.I. – and a pair of precocious Teens, Bruce will piece together a mystery more insidious than ever imagined, and find himself forced to do battle with both an enigmatic Villain and his very own conscience. In other words, the Dragon rises… and “walks on” once more!