Looking for something different to read this July but aren’t quite sure of what that might be? Perhaps these four great titles from Scout Comics this coming July will be just what you are needing! So get on down to your local comic shop and pre-order these 4 awesome titles as early as you can! 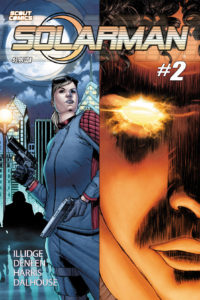 Written by Joseph Illidge & Brendan Deneen
Art by N. Steven Harris
Colors by Andrew Dalhouse
$3.99, 32 pages
Originally published by Marvel Comics and written by Stan Lee, SOLARMAN returns for this pulse-pounding second issue of the 21st century reboot! Teen hacker Ben Tucker is on the run after being infected by an alien virus and gaining incredible powers as a result. The cops want answers, a secret government organization wants his DNA, and an evil alien cyborg wants blood. This is an issue not to be missed! 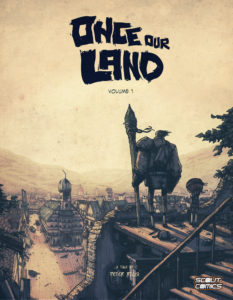 ONCE OUR LAND #1 (of 2)
Written and drawn by Peter Ricq
Full Color
$3.99, 40 pages
An amazing debut comic from a visionary new creator! ONCE OUR LAND is a post-apocalyptic tale set in 1830s Germany. It is the tale of two survivors, Ingrid & Fritz, as they battle each day against mysterious invaders that have surfaced and wiped out everything they once knew. A fantasy, sci-fi, period, and action story rolled into one epic package, ONCE OUR LAND is destined to be an all-ages classic!

ELASTICATOR #5
Writer/Creator: A.C. Medina
Artist: Kevin Shah
Colorist: Ross A. Campbell
Full Color
$3.99, 32 pages
Elasticator hits Brooklyn in full force and all should tread lightly! With new threats comes retaliation and Brother V has his eyes set on the Elasticator. It’s a time of great change in Brooklyn and everyone is feeling it, but at what cost? You won’t want to miss the latest issue of Elasticator!! 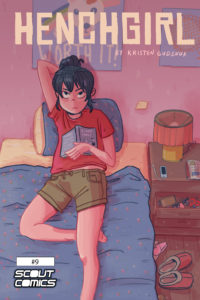 HENCHGIRL #9
Written and illustrated by Kristen Gudsnuk
$3.99, 32 pages
Full Color
Mary Posa used to hate her job. But maybe being a henchgirl for a supervillain isn’t so bad after all. Mary has the freedom to operate beyond the constraints of polite, law-abiding society. She gets free stuff. And when an unforeseen sequence of events puts her parents in danger, Mary might even end up being the hero Crepe City needs. Or not. …Probably not.