lately more and more are popping up with really good, strong, interesting and well done books. The industry has grown by leaps and bounds and the quality of this book, and this company, cannot be ignored. I love the premise and the way we are introduced to this world. From a man finding a baby girl in a dumpster to seeing her in her teenage years well it makes you think.

We’ve seen kids around and think wow they were born bad. Not just acting out for attention or because of deeper issues but just bad kids who don’t seem to fit in, are violent or overly strange. As loathe as we are to admit it they do exist but what I love about this here is that Wassil comes up with an explanation for why they are this way. Well I see it as a reason it may or may not be but they are definitely worthy of someone’s attention.

Zoel is a young lady with an attitude, she’s also the one from the dumpster. I recognize the remorse in her words in order to placate the parents she’s with, I’m guessing adopted or foster. When that doesn’t work she’s herself and she’s a complicated young woman that’s for sure. She looks like the kind who acts out before finding herself but I have a feeling that as the story progresses we’ll see she’s a bad seed. Under the guise of being sent to boarding school she finds herself with a whole “freshmen” class.

There’s only one small thing that’s been left out and that’s exactly where this Academy is located. Seems to me this is a school for those habitual offenders, which ironically I would consider most kids today who can’t function normally in society since parents rights to punish their children were taken away. From all walks of life and some may be bad while others are more likely feeling alone and confused with no one to guide them and I’m sure the class will be whittled down some, if not then hello nurse this is going to be more interesting than I imagined.

Oh the whole concept here is utterly fascinating. You’ve got to read this to understand my attraction, which you’ll hopefully share, to the fact that unbeknownst to these kids their lives were pre-destined. I guess I want to know if fundamentally speaking there’s a little good in everyone or are some such lost causes they can be written off? The writing, characterization and what we are introduced to here has me instantly hooked in wanting to see how this is going to play out. While not introduced to a whole lot of the students we don’t need to be there’s a definite cast structure, like any high school, in play and friends and enemies in play and it should be fun to see how they have to deal with each other.

I’m also digging the interiors here too. The individuality of each kid whether they have dialogue or not shines through. Also Zoel has this look that I’m drawn to and as it seems she’s the focus so that’s a good thing. The way Dave has this story flow through pages and panels is fantastic and showcases real talent.

Step away from the ordinary and help yourself to something fun, different and full of potential.

Editor’s Note: Interested in picking this up for yourself? Head here!

Angela’s parents have had it with her, and are shipping her off to boarding school. What no one knows? The school id in HELL, where it’s pass or fail. The Geekie Award Winner for best graphic novel finally comes to you monthly from Overground Comics!

Summary: In this neo-crime epic, we follow The Elasticator (aka Mikey Mazzagatti) as he tells us his story of life in Brooklyn during the height of the recession. With a city on its knees and organized crime working alongside the government, Mikey must push past his own troubles towards a greater good. Mixing equal parts humor and grit, Mikey goes from outcast to a neighborhood icon. Mikey pulls no punches as he tells a story of regret, hardship, and second chances

I liked this first issue a whole lot. This isn’t like anything I’ve read before and that’s a huge draw. If you are wondering from the get go Mikey, the Elasticator, has been arrested and is taken into police custody. So a man with abilities allows himself to be taken and it’s in the interrogation room where he tells them and us the story of how he came to be there. This is a prime example of how a small press company can put out such a good, strong and unique book that should be read. With a lot of people out there becoming more disillusioned by the “big two” and all their crazy events and reboots it’s books like this one that stands out.

So the two detectives who are questioning Mikey are interesting characters. As they sit there and listen to the story unfold it’s abundantly clear who is there to listen and believe and who is there because they have to be. Not fully listening or caring about the circumstances that made Mikey who he is while understandable for a cop is a bit cliche. Though the way A.C. is writing it it’s perfectly natural for him to feel this way and it does serve to highlight a few things for me. 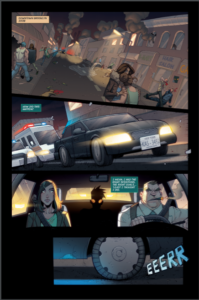 We need to see what and how the recession really affected the people of Brooklyn. It’s a four year span between the time he moved here till he was arrested and in that short amount of time we see just how far a section of the city can fall. Still who is responsible and how can local law enforcement have been so ineffective in keeping things from getting to this point are things that we will see as this story goes forward. I like how the clues are being laid out and the players in this story have been introduced. Yes there are still plenty of gaps that need filling in and to suppose answers now would be a mistake. I like that part too because to see things clearly before it’s told means the story is predictable and this is far from it.

Already we are seeing some great characterization and a direction for characters to go and it’s kind of exciting. I’m looking forward to seeing Mikey grow into a man and how his actions dictate who he becomes. While I see potential in at least one detective for understanding and guidance in a way that I hope to see. So in just the first issue we get it all, a story worth reading, strong characters and characterization and potential for what’s to come. It’s a great start.

Kevin and Ross do a wonderful job with the interiors as well. We see how much things have changed in the city from the then and now segments and it’s a nice way to highlight how far the area has fallen. There’s a great blend of styles here to make this feel unique and interesting allowing for nice detail while staying very comic book/cartoon imagery.

This really is a stand out first issue and the start of something unique and interesting that demands to be read.