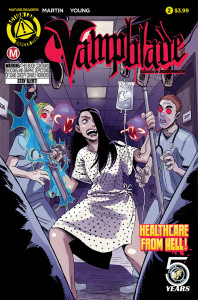 2 issues in and I’m actually really enjoying this series. The focus is still pretty tight and it can feel like not a lot happened this issue but that’s because it was mostly set up while introducing us to our first real supporting characters: Vampy’s family. Her mom and brother specifically.

This issue does take place directly after last issue and I’m still very curious to know how much of this series will take place before she appeared in Zombie Tramp. I’m not discounting though as this choice in narrative flow has me very curious for where Martin plans to take the story and the characters.

We find Vampy in the hospital for the better portion of the issue getting questioned by her family about what happened. She remembers the events from last issue but intelligently decides to say she doesn’t. The news story about last issue’s events catches the attention of some characters that so far are nameless but should be of note considering one guy is hinted at knowing about the Vampblades. The girl we see doesn’t say anything. 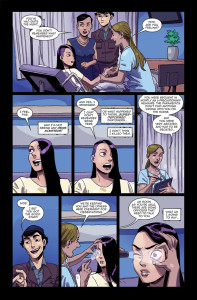 After her visitors leave the blades call for her to go feeding. Down below the Hospital she finds a next of freshly hatched Vampires and is overrun by them before they all – including her outfit – disappear leaving her alone and naked once again.

I’m VERY CURIOUS to see where Martin is taking this whole thing. I mean, we know where the Vampires come from thanks to the Zombie Tramp vs. Vampblade mini-series so what other secrets could he be hiding for these creatures? But he’s definitely caught my attention in how he’s setting up the whole shebang.

I also very much enjoy how meta it is and how smart it really is that Vampy understands she is the living embodiment of an in-story fictional character as well as her villains. That means if she can track down her old copies of the original Vampblade comics then perhaps she can surmise just what the hell is going on?

I love it. That’s really smart writing on Martin’s part and I hope he’ll keep that up. One thing this world Mendoza and Martin have built through Zombie Tramp and now Vampblade has taught me is that not always does the built up from the arc mean a satisfying conclusion. And since Martin was such a prominent writer of the ZT series I hope he can shed some of that let down seen in some earlier issues of that series to come up with some golden hits for his new series. Nothing would please me more.

And of course, Winston’s art continues to make every page gorgeous to look at. Not sure what else I should say about that. I don’t see his art quality ever going down it’s just really nice to see him going strong.

Summary: After transforming into the Vampblade and having her first encounter with the disgusting other-dimensional “space vampires”, Katie Karver winds up in the hospital. But now that she’s connected to the mystical blades there’s no place to hide from the vile otherworldly parasites that are drawn to them. Time to check out and kick ass!

Summary: Double funerals and double lives! Issue 3 of Tomboy reveals Anthony’s secret past and Addison’s murderous future, while Detective Tico is getting closer to the true identity of the Halloween Killer.

Three issues in and Tomboy continues to prove its merit with its entrancing and intriguing story of a girl who’s whole world has begun to turn her into an assassin and the darkest iteration of a Magical Girl this side of the western publishing world. I really enjoyed this issue as all the characters begin to finally play their games that will carry them through the rest of this series. Wheel within wheels we find out all about Grandpa’s past this issue, the heartbreaking end to his career plus that mystical beginning, and the disturbing psyche he finds himself in and has been hiding from his family for who knows how long now.

I’m actually very surprised we got Grandpa’s backstory this early in the series as I had assumed it would probably come later. But what we get is fascinating and heartbreaking all at once. An introduces us to the prospect of others who may hold Addison’s new powers as well. An organization that for all we know is still active to this day, albeit secretly.

The biggest WTF moment of this chapter however is when the story is all done and Grandpa walks into his room, opens his closet, and reveal a shrine to his dead wife and what looks like her perfectly preserved young face placed upon a mannequin’s body while propped up in a sitting position. Shit is definitely gonna go down once all that is revealed to his family.

Also the motto, or absolute rule, for Grandpa’s order is “Let justice be done though the heavens fall.” Which is an actual latin term that fits perfectly for this series. It means, and this is spelled out in the issue, that no matter the consequences justice must be served. And in the case of our current heroes there is no other term best suited for them.

It also reminds me of the anime Aldnoah.Zero which was an anime that used the phrase as a tagline for the show’s title logo. That was a terrible anime. But Tomboy I’m more than certain isn’t attempting to be the next A.Z rather it’s own thing which it’s quite excelling at.

It’s also revealed this issue that Addison’s father can see and speak with one of the ghosts of the murdered while the younger one watches over Addison. I’m very interested to see where that story goes and to find out how much he really knows about his father’s and Addison’s secret world.

And of course Goodwin’s artwork is amazing. Tomboy is such a beautiful series to look at. I’ve said that before and will continue to say it again until Goodwin herself stops illustrating her own series, which is very unlike to happen. All the better then for us readers.