There really is something extraordinary about this series.

Just the fact that it centers around a black father and son coming to terms with each other and the world they live through and experience the father has as Tuskegee airman and the whole Martin Luther King Jr. events of the time really has an impact that goes so much further than just that. Also that it’s all tied into historical events and brings knowledge and a point of view not commonly seen makes this even more important of a read for me. Garth is a master storyteller of that there’s no doubt but for some reason this one for me is just something i’ll never forget and we’re only two issues in.

Simon and John bring something just as incredibly special to the book as well. Their interiors are stunning and the amount of detail and shading brought to the book is just wow. The sense of emotion they can get a reader to experience just from seeing the weary look on dad’s face and the growing awe and respect from his son speaks volumes to me as a reader. Also the way you see in the characters faces the eating of their anger and frustration cannot be matched anywhere else today. Then of course their are the planes themselves which yeah such authenticity is on display. 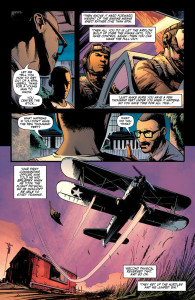 I think the fact that this book transcends what happened then and can still be relevant to what many experience today through any group, seriously be them black, hispanic, gays you name it, makes it just that much impactful. You hear people say the struggle is real but unlike them these folks demonstrate what the real struggle is. The bonding that occurs here in these pages is unlike any other you get a chance to see. Be it with the airmen he served with or what’s transpiring with his son there’s so many lessons to be gleaned from what Garth is bringing us.

Editor’s Note: Head here to find out how you can acquire a copy!

Summary: Reggie Atkinson continues the story of the Tuskegee Airmen, from their training as fighter pilots to their first combats as they fly against the German forces occupying Sicily and Italy. The men of the 99th Fighter Squadron do not lack spirit- but the opposition have years of experience and vastly superior aircraft. Reggie and Fats must fly for their lives, ever conscious of the racial bigotry that sets them apart from other American squadrons…