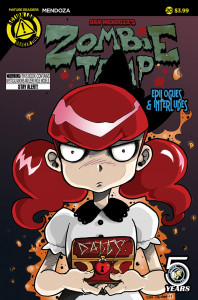 Review: This was definitely not the issue I was expecting it to be. Honestly, I’m not sure how I feel about it just yet. Acting as an epilogue to the wonderful “Bitch Craft” arc that just finished up and serving as a teaser for what’s to come next issue Mendoza uses this issue to get all of his players lined up for the coming arc. One he’s been working towards for quite a while.

And yet curiously he also uses it to tear down Bea’s little sister Eve and her family, whom we last saw in the “Bitch Craft” arc and brutally make way for the return of Morning who’s currently half a world away from Janey. But will no doubt make a big splash in the coming war.

I was rather sad to see Eve put in prominence this issue only to be torn away soul and all by the end by the accursed Morning. But not because Morning WANTED to do it but because Eve forced her to. The thing is I’m not sure if this was the right path to take for that character, and it feels by the end that perhaps Mendoza wasted a potentially good character on the death of Eve and her family.

It all really depends on how important of a role Morning will play in the coming arc. Knowing that Morning will eventually have to return to the grave and that she didn’t want to be a evil girl this time around plus knowing she WANTS to be returned to the after life makes me fearful of whether or not this was simply the right move to kill Eve. When Eve could have become a potential big player herself in later issues.

We’ll just have to see. This is the kind of issue where its importance and validity all hinder on not-yet-published material. That’s just Eve/Morning’s arc however, which takes up majority of the issue itself. Near the end we get a small tale with Xula who is still making her way to Janey as she gets in a scuffle with some bikers who just want some pictures with her. Xula definitely handles things a bit differently than Janey does, as I’m not sure if she would’ve immediately went for the kill unless she was especially hungry or angry. Xula was a bit of both but seemed to take her frustrations out on the innocents simply because she was annoyed.

I am very interested to see where Mendoza takes these characters next because it certainly feels like something big is coming. And the “Next Time” feature plays with the idea that a war is coming for our wayward Tramp – whom we only see in the final panel of this issue, might I add. I actually think it was a smart move to focus on Morning and Xula this issue and leave Janey to the wayside this time around.

It builds up the suspense, but also these 3 girls have a long history about them so to see them all butt heads once again in the coming arc I am definitely interested to see what Mendoza has in store for all of them.

A good issue overall, I just hope Eve wasn’t wasted and that Morning gets made the most of for the exhaustive efforts it took to get her back into the playing field. And as always Mendoza’s artwork is gorgeous and I always love when he’s at the heal artwise. I really do like his combination of anime and cartoon style and how curvy it all is. These aren’t new words though, but do serve to reiterate what a feast for the eyes this issue definitely was.

Bring on the all-out brawl of Pimps, Ho’s, and Hocus Pocus!

Final Score: 3.5 Epilogues and Interludes out of 5 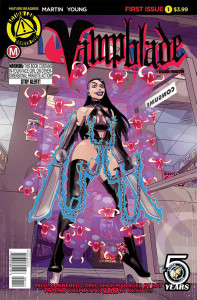 Summary: From the pages of Zombie Tramp and Zombie Tramp vs. Vampblade comes the walking, talking, and breathtaking homage to the 90’s herself: Vampblade in her own ongoing series! Before she was a comic shop employee and a cosplayer but all that changed when she found the Vampblades which transformed her into her hero, the death goddess Vampblade. These are her chronicles as she faces alien Vampire slugs and learns how to fully use her new-found powers!

Review: Vampblade is a character that I really took to after she debuted – in the mainstream anyways – in Zombie Tramp quite a ways back. She was hot, badass, and kicked ass too. She was a perfect foil/companion for the Tramp, and though their crossover ended with the two still on bitter terms with one another it was great news for us fans when it was announced she would get her own ongoing series.

Now, the first issue starts out rather interestingly because all the events within take place before her time in ZT or in the crossover and serves essentially to be her origin story. Which I have no problem with, but I do wonder if this whole series will take place before those events or whether it will be just the first arc? Honestly this issue could have ended where it did and then issue #2 will be present day for the slug vampire slayer.

But for now we’re discussing issue #1 which actually wasn’t a bad start for the new ongoing series. It’s quite cliché and the events within kind of just happen but all in all I think it works well with the 90’s homage that Vampblade most certainly is. Back in those days events kind of just happened to the heroes the only difference then was those stories were “fresh” in their takes, and thus laughably boring to boot. Here is feels fresh because it’s purposeful and fun in the way the narrative is being told. 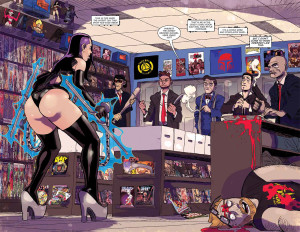 Would I have enjoyed a bit more intelligence in the story, such as the replica Vampblades appearing out of nowhere and of course they’re the real deal being far more interesting than it actually had been? Yes, I would’ve enjoyed more thought put into all of the events within the issue. But I also had tons of fun reading the issue so that definitely accounts for something. In that respect, Martin is doing his job well.

We also get hints at things not being quite what they seem for the Vampblades or at the very least I’m curious to know their origin and how Vampblade was able to become and in-story fictional character. I’m sure Martin has it all planned out however so now all that’s left is to wait and see what further adventures our sultry slayer can get into next.

I definitely enjoy her humble origins as a comic shop employee and average, but lovely, nerd. And I definitely find it interesting that her boss was essentially a member of the mob using the very shop she was a lifelong fan of/employee of as a front for his shady business. The owner dies this issue however so I wonder if that will come into play again of if it was all just used to get her into the suit and into her first slaughterhouse of a fight.

Young’s artwork is great just like it was in the crossover mini-series. I really, really like his rounded cartoony style and I feel that it fits with this world Mendoza and Martin has established quite perfectly. I may have said all that before but it still rings true today.

My only fear with Young is that he barely was able to hold onto doing 3 issues in the crossover series, causing ZT vs. VB #3 to go on months delay. Will he be able to handle and regular ongoing? I’m skeptical, but hopeful. Or perhaps Martin will have different artists change out every arc or so such as Mendoza has done throughout Zombie Tramp’s ongoing run? Only time will tell.

For now, this was a fun and enjoyable opening issue. Could use a bit more oomph to the narrative, but not a bad start. Not at all.

Final Score: 4 Sluggish Vampires from SPACE out of 5