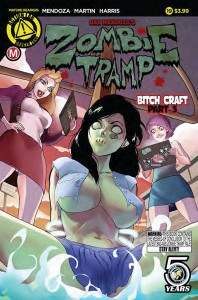 Review: This was not at all how I was expecting this story arc to end. That was… well, that was great. Mendoza really lays it all down this issue as Belle is forced to come face to face with those twinky bitches from school after they attempt to kill her and Bea’s little sister.

The issue starts out mildly enough with Belle in Bea’s form having ice cream with Bea’s little sister. Yeah the girl is bratty but she means well. She’s a little girl after all. And as Janey explains “the problem with eating people’s memories is you start to love total strangers.” It’s a nice peace of dialogue to show the bit of softer side of Janey we very rarely get to see. I really liked knowing that Janey was genuinely starting to like the little girl even knowing that the relationship itself was a temporary thing.

I get the whole point of the series is to follow the zaney adventures of the Zombie Tramp and her badass fights against those who are evil. But she was human once, and she was hurt many times over in her previous life and the same has continued to happen in her new life. It’s hardened her, but she WAS human once and every once in awhile it’s nice to have to clarity in that fact.

The rest of the issue is dedicated to Janey going full on berserker mode after the Mean Girls run her and Bea’s sister off the road in attempt to kill them. I feared for the little sister at first, because I could totally see this series killing her off in attempt to make those terrible things Janey does to the Mean Girls that much harsher.

However, it’s even more messed up what ends up happening instead. After whittling the girls down to their fair leader, Janey gives the woman’s fate over to the girl who is shown her older sister’s body from a few issues ago. The monster Janey has just created cannot be understated and yet I don’t believe anyone can condemn her for it either.

The way Mendoza writes this issue with such care I can’t sit here and tell you how in the right or in the wrong Janey is for giving her power over to this little girl to do with it to take a life. But it’s definitely going to come back to haunt her. For all the good Janey really does try to do in this world, the karma points are still stacking up against her for all the bad she has to do in the process.

This is a big one for sure.

The last part of the issue features Xula finally making a move after being last teased way back in the Breaking Bath Salts arc. I’ve been very curious to see what Mendoza has planned for her and I’m really excited to see what his big magnum opus is. Whether it be next issue or a little later, Xula’s comeback is imminent and I have a feeling it’s going to be a really big story none of us are going to want to miss.

Harris’ art is great as always. I feel her cartoonish style really worked well to counter-act the layers of darkness in this arc in particular. Giving it more of a comedic feel than the tragedy it actually was. It was good choice to bring her back on for these last few months. Also in this issue of Zombie Tramp’s “Who’s that reference?!” Ash Ketchum from Pokemon makes an appearance, as well as Pinkie Pie from MLP and it took me till this episode to realize Xula’s current form is a parody off of Storm’s 80s mohawk look from the X-Men.

In its subject matter alone this was a dark arc, and in its execution this arc was made even darker. But it was also well written and well thought out. And did a great job at setting up what’s to come as well. I’m really excited to see what comes next for Miss Janey Belle the Zombie Tramp.
Final Score: 5 Pop-Culture Icons out of 5