Review: This issue is something I decided to pick up on 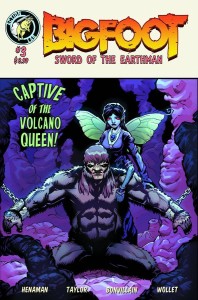 a whim, never having even heard of Bigfoot: Sword of the Earthman before. But from the cover alone I knew what this was all about and I really liked what I saw. It may be a random issue #3, however let’s see if it’s any good?

Honestly, there wasn’t much that happened this issue in terms of story/per page count. What we did get however was fun in its own right. Bigfoot and a companion fall into a Volcano after they have troubles with some creatures only to come face to face with a demon queen who wishes to lay with one of them and break a curse that has brought her only ghouls for children.

In light of that however first we must learn her back story which we get through a sort of fable elders tell the children of this world to scare them. It’s definitely a clever way to tell one’s tale in a comic, and her’s is a sad story at that. Once we learn her story though Bigfoot and his companion free themselves from their chains not long after and make a daring escape leaving the queen in the dust.

I’m not sure if this Volcano Queen will become a bigger character later but I definitely would have preferred a lot more action or story in my first Bigfoot issue rather than two/thirds of it being taken up by this fable.

The art is really nice for this series. Rough to look at but the movements in the characters hold up well and throughout the issue I kept silently complimenting the art. Almost as if it were to hear me it would stop being good art in rebellion or something.

Unfortunately there’s just not a lot I can talk about as far as this issue goes. It’s really dry on actual story and plot progression – if this series has any – but it’s nice to look at and just really, plain fun. And I feel we need that from time to time or we’re going to go mad as fans.

I wouldn’t mind reading more of Bigfoot as a monster slaying barbarian as well as a savage swordsman. And this is definitely a step in the right direction for that.

Summary: It’s Conan the Barbarian… but with Bigfoot! How freakin’ cool is that?! 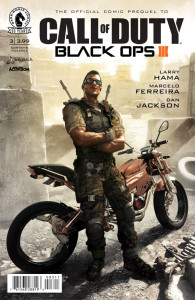 Summary: In the future, a world ravaged by environmental change and transformed by technology is gripped in a new cold war. An elite unit of soldiers, including Dylan Stone, Jacob Hendricks, and John Taylor, carries out the wetwork of the Winslow Accord deep behind enemy lines. They’ve been following leads from Uzbekistan to Finland, chasing down the deadly assassin known only as “the Wet Witch.” In Helsinki the team picked up a sniper: Alice Conrad. Their plane gets shot down in the remote arctic, where they have to fight tooth and nail for a clue about their enemies’ plan . . .

Who are you going to call when you need a war story told? None other than Larry Hama because he’s the man with the plan and the ability to really tell a story so involved in military jargon and sequence that you just feel it’s incredibly accurate. I’ve never been in the military so their behavior is only something I’ve seen in movies and books so for me yeah this has a great feel and tone to the writing that this unit is what I think of as being right.

Just an fyi here too Marcelo and Dan’s work on the interiors is pretty fantastic. Aside from some great moments of realistic people and human anatomy they are able to bring action sequences to life with a sense of motion that’s hard to do. Also the use of pages and panel layouts is impressive to help not only the flow of the story but to highlight certain things as well. Of course I’m also a huge fan of backgrounds and the perspective they bring so that they don’t shy away from effectively using both makes me a happy camper. 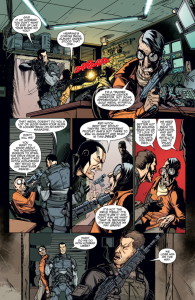 I’m not a video-gamer so for me this is all I know about the franchise, expect maybe it’s a first person shooter game. So the story we get and the mission they are on is more than enough to keep me not only entertained and thrilled but also thoroughly engrossed in what’s going on. The characterization is spectacular and while not everyone is expected to live it’s nice to see that sometimes they do. Then there’s also the teamwork on display here that only a team so oiled and used to one another can produce. Larry’s really got an exceptional eye for that kind of detail writing and it comes through both boldly and subtlely here.

There’s something crazy fun happening here with the story as well. The Red Witch, the Wet Witch and whoever and whatever else the Russians are sending into play have done a fantastic job of misdirection. As the story moves forward and we learn things aren’t always what they appear to be it just gets that much more interesting and the bad guys aren’t as clear cut as you’d like to think. Granted everyone has a reason for what they are doing and some aren’t as altruistic but then is this team’s any more so?

This is a perfect action/adventure military thriller.