Review: So… uhh… what was the point of this two-parter? After a very promising opening act the second half of Bloody Bones’ latest conquest spittles out in a 22 page mess that ranges from awkward story choices, terrible art, confusing character moments and a senseless lack of development overall.

I honestly don’t have a lot of good to say about this issue. It was just all very awkward and seemed almost completely disconnected from the #116 aside from a few panels set in the dream world as well a a few panels showing that there were, in fact, three villains who stormed the school on our wayward heroes.

That last part is important because Bloody Bones is almost completely forgotten soon after the story switches to a strange focus on The Warlord of Oz as he fights his way through the castle and is then abducted to Myst by his mother, Belinda. I assume Bones is now hiding out in the Castle until he can strike again when they’re once again vulnerable but really, who knows at this point.

As for the third villain she’s seen once at the beginning and once at the end with a presence that is completely lost within the confines of the middle portions of the issue. It’s all a very strange way of invading students which you entranced them in their dreams and quite easily to they escape those confines in this issue.

I did appreciate Sky basically saying they need to either move or get on top of their game with Bloody Bones or he or any other villainous creature will keep storming the castle like I said last issue. That, at the very least, is a step in the right direction.

As I said earlier the art by both artists is just… awful. And there is a very clear difference in their styles as well halfway through the issue. It was easy to tell the hand change and I don’t understand why Claretti couldn’t stay on to finish up this two-parter. Let alone letting TWO different artists with distinct styles take up finishing a single storyline in a single issue.

This is a black mark in Shand’s usually graceful run on GFT. At the very least it’s just one of a few and overall his run has been really damn enjoyable. I just wish every issue could be that way. But alas, no they cannot. And “Something Wicked Part 2” was something wicked indeed.

Final Score: 1 Black Smudge out of 5

Summary: As two of their own fall, the remaining students at Arcane Acre must break free from the terrifying world of nightmares into which they’ve been submerged. As Skye and the others fight for their lives, a secret almost one-hundred issues in the making is finally revealed. 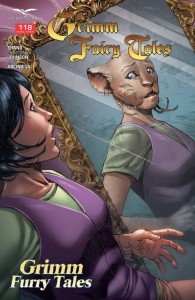 Summary: Wiglaf is a bit… different than the other students. However, when he does a spell to appear as human, he quickly discovers that everyone else in the school has gotten a little furry. In the craziest issue of Grimm Fairy Tales yet, Wiglaf learns the oldest lesson in the book: be careful what you wish for.

Review: Let’s forget for a second that it does feel strange to me that Bloody Bones hasn’t done anything in a month after this issue took a month long time skip. Let’s forget for a second that near the end Ali mentions he was reversing the spell Wiglaf casts this issue that creates the main threat for our heroes, and then states that if he succeeded in reversing it they might all have been stuck in their new forms Wiglaf gives everyone.

Let’s ignore those two things for a moment because overall this was a really fun issue about Wiglaf and his inner struggles to fit in as a cat person in a world surrounded by humans. Sure, this wasn’t the strongest issue Shand has written and it felt awkwardly placed in between last issue’s invasion and the next issue which promises to give us answers about Bloody Bones and what he really is. But depending on what Shand has planned for the future there may not be a better place to put it.

Wiglaf was a character I really wanted to get attached to – kind of like Wulf – early on but then they both turned out to be douchebags so it’s been hard for me to continually want to root for them. This issue really does do a good job at bringing him a little more down to Earth. I also think it’s highly appropriate that him and Mary are going to become a thing. Two of the outcasts who joined the group but have stayed more on the sidelines since their introductions.

It was also really fun to see everyone else turn into Kavari Cat People just like him. The spell turns him into a human and everyone else into Kavari, by the way. On the side though are two other subplots. Sky, Ali, and Lance all plotting to do something to keep Bloody Bones from ever tearing apart their castle again – I’m sure we’ll get to see what that is next time – as well as Belinda having left the company of her son and now on an adventure to find answers about Bloody Bones with an ancient creature who knows much about the universe all the way back to the beginning.

Both stories weren’t bad. Belinda’s was definitely the most useful for the issue while Lance and Sky traveling into the city made for hijinks galore as soon as they were cat people slowing down their plans quite a bit. Belinda’s because we at least got something from that story, not so much the other two except that it confirmed them as a couple as well. Man, Wulf is going to feel so left out here soon.

Johnson’s artwork is cartoony but fun. A very whimsical style for this issue was a nice touch and though there is a panel were Wulf doesn’t have a mouth when he easily could have it’s easy to overlook by the rest of the detail added to most of this issue.

I really liked this one. And I’m very curious to see what happens next on GFT!