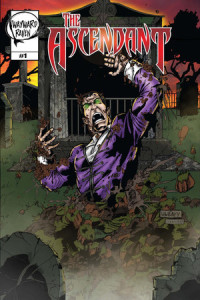 n interesting fellow, a bad ass Duke of Hell at that who pretty much did every single depraved thing there was to do in the book while in Hell before realizing his existence pretty much sucked in that sort of environment. Suppose one could call that a crisis of conscience right there. I like that he’s willing to take on the responsibility of taking other escaped figures from Hell and kicking them back into it since it was his own fault to begin with for them getting out. A heavy burden for sure and any other big decisions is something he’ll probably think long and hard about before doing so as not to cause any potential issues. I wonder how much time he’s already spent as it is in sending escapees back? And what would it take to permanently keep it from happening?

Would it be his freedom outside of Hell that he would have to give up in order to keep anyone else from escaping? Which would certainly be heart breaking for sure if that was the case and I imagine Mark Frankel will explore that at some point as this title goes on. Mark’s done a fantastic job with this first issue and I like that he brings in a character like Faustus who many know of from the Faust legend from Germany. What he does with Cail is pretty interesting to see and leaves me curious about something he learned of in regards to the Duke. Whatever it is he learned though seems to be pretty darn bad if Cail doesn’t even want so much as a hint of it being mentioned.

Its nice that Cail is able to take care of two problems at once, one being the villian of the story who Faustus also has beef with over his lady love from way back in the day. Though one of the ways Cail is able to do this makes me wonder how Faustus even managed to get a hold of something like that item. As you’d think it’d be fairly impossible but I guess a long lived fella like him would know. Of course knowing that the big bad could make a return kind of takes the finality out of the whole thing where he’s concerned. But it would be interesting to see how a re-match would go as I imagine that guy would be angry as Hell and looking to give the biggest amount of payback he could give to Cail.

I am definitely looking forward to seeing whatever happens next. And if the creative team for this issue are on it with Mark? So much the better! The Ascendant #1 is also available in print or digital so head right here to grab up a copy!

Summary: In an epic battle in Rome, the escaped Duke of Hell named Cail struggles against the demon Halstein but cannot vanquish the juggernaut. Cail calls upon the infamous Dr. Faustus for help and is taken on a dark journey through the Eternal City before a final showdown.