Review: I have to hand it to Bloody Bones, he’s at least a villain who doesn’t sit around and wait for the heroes to get comfortable. I mean he has to wait till they’re asleep, but while the students are carrying about their lives Bloody Bones is outside their force field breaking down the barrier the first chance he gets. He’s a villain who’s tryin’ to get crap done.

However this issue features yet another siege on the school and more characters killed. If this two-parter doesn’t end with Sela up and moving everyone out to a different location then I’m calling bollocks. Or at least beef up security on this school, damn. There have been waaaay too many sieges and characters deaths since this new era began and every time the kids end up going back to their daily school lives with only inklings in their memories of what happens just a few issues ago.

I really dug this issue and it’s focus on the characters as they all continue reeling from the events in issue #12. We even get introduced to a new student with awesome magic skills this issue… only to have him killed later on. I wonder if the body count is going to rise even higher by the end of this two-parter.

I do think Shand wasted potential on this new character by having him die in the same issue he was introduced in, and that especially rings true for Mary who so far I’m not sure how Shand actually intends on writing her. Perhaps it is my memory failing me but the Mary of the last few issues does not seem like the same Mary from issue #114, her introduction.

The shared yet different dreams everyone was experiencing due to Bloody Bones was really fun to watch as well. Honestly when it comes to this issue what I am most impressed about is that Bloody Bones isn’t waiting around until the plot demands it, he is a villain who knows what he wants and by damn it he’s going to get it one way or another. But I am sad by how much this confirms that Lance is not Bloody Bones in disguise as I would have really enjoyed that. I know we go a back story on Lance last issue, but I was still holding on some semblance of feeble hope on the matter.

Luca Claretti’s art is great and some of the best I’ve seen since this new era of Shand’s began. The villains look especially badass this issue and I can’t wait to see more of Claretti’s art in the issues to come. At least I assume I will be seeing more of their art in the issues to come. If there’s one thing this series has in constant it’s great art from great artists. I mean seriously, Bloody Bones astounding, he really is a cool villain.

Final Score: 3.5 Go-Getter Villains out of 5

Summary: After events that led to a seige on Arcane Acres, and the death of one of their own, a new year has began for the students who are learning to become Realm Knights, protectors of reality. However, things are still not as they seem… and this new year may become the deadliest year… 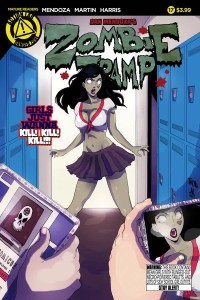 Review: In another solid issue, this series really feels like its turning on the up again after the underwhelming KKK storyline a couple of issues ago. Last issue was the series’ best to date, but what Mendoza offers up here is a really fun romp as Janey discovers that her Necronomicon book has been fully translated and uploaded into an app on the internet that anyone can use.

This issue also sees the return of Victoria Harris to art duty who I really enjoyed back in issue #12 which I remember being a really solid and great issue to read. I enjoy her art here as well, it’s really fun and fits the comedy side of Zombie Tramp really well. It brings a further atmosphere to the experience as Janey hobbles around trying to get to the bottom of this Necronomicon app business and to get back at the girls who downloaded it and used it to kill an innocent young high school outcast.

Now Janey must impersonate the young girl and track down the girls at school which mean next issue is going to be really fun to read as well. I also enjoyed the Mean Girls vibe to the whole thing. While the issue does seem to be more of a set up for later events, it still feels like a sort of story in and of itself as well which I know sounds paradoxical to say. I didn’t walk away thinking I hadn’t read a whole lot and that I actually read quite a bit and yet it isn’t a full story with most of the meat to come next issue.

I enjoyed seeing Janey give this girl some spunk though, I mean I feel terrible for Bea and how gruesome and unwholly she dies, but afterwards it becomes a great means to see this girl through the guise of Janey punching Jocks out and giving her high strung father lip. I’m sure he’s not getting out of this story alive, generally anyone who’s an asshole to her gets their due by the end of the tale.

This was a great, fun issue to read. The comedy was high, the characters were fun to watch even if most of them were douches like is the usual, and I enjoy that the story is still dealing with repercussions from the time Janey let her Necronomicon get stolen and into the hands of an asshole high schooler.

There is also a short Zombie Tramp story in the back of this year’s Comicfest preview of Vampblade #1 written and illustrated by Dan Mendoza which takes place chronologically before this very issue and after issue #16. It boasts Mendoza’s wonderful art style and also tells the tale of Janey sitting at a gas station contemplating why each adventure she has had has been met with asshole after asshole. Never a happy ending, never anyone she can get close to.

This is something I have complained about in the past with this series, and I am glad Mendoza is aware of it, and not only aware of the fact that Janey has no real supporting cast nor is she ever able to come across a decent human being but he’s also making an effort to make something out of that. Maybe there really is some grand plan to this series that I haven’t caught onto yet, some genuine reason why Janey continues to be placed in shitty situations. I’m all eyes Mendoza, I’m ready to see and know what all you have in store for us.

I still enjoy this series month in and month out, 16 issues in and Zombie Tramp continues to be an overall strong series full of comedy, action, and a fun main protagonist. There’s still ways I’d like to see this series go but I’ve haven’t gotten bored with the regular solo adventures of Janey Bell just yet. As long as that’s a thing, this series will continue to be a regular in my catalog.

Let next issue come soon, for I am excited to see what comes next.

Final Score: 4 Mean Girls out of 5