Review: I know this issue came out quite a few years ago, but I still love it every time I read it that I just felt the need to gush. Whatmen?! is a parody through and through, and much like Megaton Man spoofs not just the original work it’s based off of, 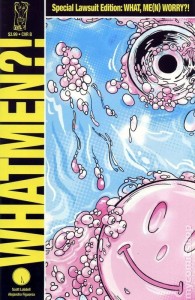 but a whole host of other comic culture that makes this medium so enjoyable.

The narrative is fun, sassy, and no-holds barred silly. It KNOWS what it is and isn’t holding back at all. We get to see spoof’s of the X-Men, Spider-Man, the “Understanding Comics” book series for goodness sake, and even Calvin & Hobbes. And it works. Lobdell understands the original work pretty well if he’s able to spoof the original 12 issue series in 1 issue and make it this fun.

The jokes are loose and fast though, and sometimes are a little quick for their own good. There is also so many in-jokes that you kind of have to be a comic fan and have read Watchmen in order to understand them all. When I first read this book quite a few of them flew over my head, but now I am much more of an “in-the-know” kind of fan and I was able to follow this book much easier on a second read-through.

This is a pretty childish book however, with fart jokes, sex jokes, and whole host of other “childish material” which could be a turn-off for most people. But if you’re a Deadpool fan, you’re probably going to love this issue to death (which is funny, since I’m not that much of a Deapool fan).

The art is pretty cartoony & goofy. It’s rough looking, but fits the overall atmosphere the books gives off. Out of all the characters, I think Hooty & Jane are the ones who walk away looking the most in need of polishing in their appearance. I would like to see some more from Figueroa though, I like his style. I’ll have to check out what else he’s done.

Don’t go into Whatmen?! Thinking it’s going to be “high-brow” parody humour. It isn’t. It’s Robot Chicken humor, and I love Robot Chicken. So I love this. If you liked Watchmen, I suggest this book.

Synopsis: Really, this is just a spoof on Watchmen and is all about making fun of the series and throwing in as many jokes as possible. But if you don’t know the synopsis to Watchmen, it’s about a bunch of legacy heroes trying to live up to their predecessors and trying to figure out a murder plot against one of their own that leads to a conspiracy to destroy a good portion of New York. Sounds good, no?