Review: (Potential Spoiler Warning) Now I first remember hearing about this awhile back (can’t say what sort of time frame, but not a long, long one at least!) and at the time I unfortunately had only just one small part of the story. Which, you know, sucked a little. BUT! It was honestly enough to get me interested, 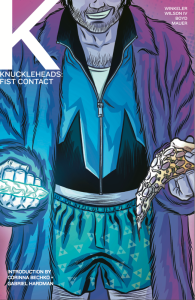 sadly I never really got the chance to see about getting previous issues for one reason or another. And then good ol’ IDW came along and decided to publish this very title I’m talking about. Which is a huge yay for me as far as I’m concerned! Getting to read from start to finish rather then sort of in the middle was a very awesome experience for me. As its never really a good idea to start on a book series or some such when its pretty far into the series. Unless you’ve got access to the internet, then it helps you out a bit in learning about what’s what and who’s who. Yay internet! Its not often I get to read anything published by anybody from my neck of the woods. Those woods being Oklahoma, plus reading a fairly amusing introduction to this trade made for a really great combination.

Seriously, best introduction to a comic book ever. Now as with most superhero related comics, you either get to see a new hero just starting out in some various way or seeing one who’s well established in his or her own right. Maybe even looking to retire and pass on the torch. But with Knuckleheads, Brian and Robert essentially broke the mold with this idea. Trevor K. Trevinski (main guy of the story!) is definitely not the type of guy who fits the superhero mold. Matter of fact, this guy would rather chill out on the couch, eat pizza, play video games (great idea actually!), get drunk, and watch a lot of Netflix. Maybe use his abilities to cheat in some way. Likely to give some old timey Superhero a heart attack after frothing at the mouth due to how lazy and un-motivated Trevor is. Why being hung over and those offering things really shouldn’t mix! You’ll learn what I mean by that once you’ve read this yourself, or you’ll get it right off the bat if you have read this already.

As I mentioned previously, Trevor isn’t the type who is a hero and cause of that, a lot of what goes on in this book leads to things being fairly amusing and nicely not all that serious. Which yes, does awesomely include a fight with a giant monster. Throwing a condom filled with Pepper Spray at a monster’s eyes is while an interesting idea indeed, but still a pretty bad idea to try. Go Lance and the Pizza Guy! During the diner scene with two would be robbers who seem to have at least a few smarts in both of them. There was a moment where I was briefly thinking that Trevor’s power source is a weird one if it requires him to be running around in his boxers. People in suits are evil man!

Robert Wilson’s art, which was brought to life pretty great by Jordan Boyd are also two more things I enjoyed quite a bit. Wilson didn’t slouch at all in making sure each character had their own distinguished looks. I do hope Boyd will be sticking around for quite some time to continue helping bring to life Wilson’s art. Due to quite a few cultural references used in this book, its pretty obvious Brian himself had a lot of fun in writing this. The use of a line from the first Superman film is done amusingly well with what he was going for. After having read this, I definitely wouldn’t mind reading more of Brian’s work. Even if it happens to be more serious then funny. And I think that for the most part, Thomas Mauer’s lettering work only really stands out during dialogue used by the bad guys. Which helps out a bit in telling who is a bad guy and who isn’t.

As I mentioned before, every character nicely has their own looks, and they all have their own great personalities as well. Reading through this for a second time while writing this, I admit that the hot, drunken English chick (also known as Emma) reminded me a bit of Doctor Who’s Donna Noble. Has me wondering if Brian might have been a bit of a fan of her. A shirt she’s seen wearing later on is another of those nice cultural references that can be found in this title. And while Donna’s weapon was her wit and mouth, Emma’s weapon(s) is her fists. Which likely should be labeled as Weapons of Mass Destruction! I like that the origin story is merely more of a flash back that takes a page or two, and certainly shows just why you shouldn’t leave a hung over friend to do things in your place while you are otherwise busy! I do hope we get to see Lance’s reaction to how Trevor got the Crystal Fist once and if he is able to fully remember.

When you start reading this, you might think its pointless and doesn’t deserve to even be part of the Super Hero genre, but trust me its far from pointless and definitely does deserve its own spot in the Super Hero Genre. Its a fun reading experience, especially if you don’t like when the writer holds back on the language. Brian nicely manages to bring on some fairly serious issues to show that its not all fun and games as we get to the end of this title, and the potential ramifications from that are only briefly shown. Something I imagine that later on will be of very bad tidings! So if you passed this trade up, go back to that store and get it after reading this! A definite plus to have in your collection! And I do have to add that this, along with Inverse Press’ ‘The Absentee’ #1 (reviewed by Steven!) and BOOM! Studios’ ‘RoboCop’ #1 (reviewed by me!) are now among my top favorite recommended reads of this year!

Summary: Trevor K. Trevinski was massively hung over when he was given the cosmic powers of The Crystal Fist, so he has no idea how they work. Join Trev, his roommate Lance, Pizza Guy, and Emma, the “hot drunk English chick,” as they embark on a hero’s journey, hitting every pothole along the way.