Review: Not so long ago, IDW started publishing some brand new Judge Dredd stories. It meant Americans could enjoy THE LAWWWWWW without having to pay stupid amounts for shipping. If you haven’t already, you should definitely check it out.

But how can IDW match that? Who can match the amount of awesome produced by Dredd? Rogue Trooper, that’s who. The blue badass of Nu-Earth! 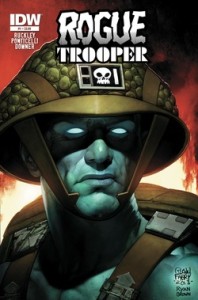 For those of you who don’t know, I’m quite a fan of Rogue. You might have seen my recent article on Trash Mutant, for example! And I KNOW you loyal IndieComiX readers would have seen my review of War Machine a while back.

As big of a fan of Rogue as I am, this title completely slipped under my radar until recently. I nearly missed this! I nearly missed the return of Rogue!!! But, is it worth it? Is the new series good enough to rival the classics?

This is a reboot. War Machine was also a reboot… So technically, I guess this could be considered a reboot of a reboot! A Rereboot! A rebootboot! BOOTBOOT. Whatever.

Unlike War Machine, this version of Rogue is very reminiscent of the classics, in terms of story. It follows Rogue as he scours Nu-Earth in search of the people responsible for the death of every other G.I (Genetic Infantryman), which occurred when landing on the planet.

During his search, Rogue comes across a group of Norts (The bad guys) escorting a Souther (The good guys, more or less) named Joe Break, A.K.A Breaker, towards their HQ for interrogation.

Rogue offers to escort young Breaker back to friendly lines, since Nu-Earth doesn’t have the nicest of inhabitants. The planet is actually toxic, forcing everyone except the native nasties and Rogue to wear protective suits.

Pretty simple side mission, right? Rogue fought for the Southers before deserting in order to go searching for revenge, so maybe it’s not THAT simple. He’s going to be walking right into a base full of people who think it’s just some deserter, so that could be pretty awkward.

It’s a pretty standard start, not the most in depth or complex opening. But that’s ok! It’s a well written start. It’s fun, full of explosions and stabbing and shooting and all that other stuff that’s awesome.

One of the most important things about this, the lack of which bothered me about War Machine, is the fact that they included Rogue’s fallen friends Bagman, Helm, and Gunnar. If you’re not familiar with these guys: When a G.I is killed, their personalities are downloaded into a chip that can be removed from their person and put into a piece of equipment for safe keeping.

Rogue’s squad is an important part of the story; they’re a reminder of his mission, haunting him and pushing him forward. It keeps the book from turning into a generic war story, even if it IS set in the future.

The art isn’t too bad. It doesn’t have the same iconic feel as Dave Gibbon’s original work on the title, but it does the job. It’s detailed, gritty, and pleasant to look at.

The cover by Glenn Fabry is definitely the stand out artistic piece on this book, though. I’m not normally a fan of Fabry, but he definitely knows how to make Rogue look all kinds of awesome. It’s simple, detailed, and well done, much like the rest of the book.

Summary: Nu-Earth, just another planet ravaged by a galaxy-wide war, its atmosphere poisoned by chemical weapons. Created to fight in such conditions were the G.I.s–genetically engineered infantrymen. But now only one remains, the man known as… Rogue Trooper. IDW is proud to re-introduce Rogue Trooper in this all-new series!