San Diego, CA (November 11, 2015) – IDW Publishing has announced the promotion of Jerry Bennington from Director of Business Development to Vice President of New Product Development. Bennington’s primary role will be to further develop IDW’s emerging business units to include IDW Games, IDW Limited, and impulse pack product lines.“Having known and worked with Jerry for over 20 years, it hasn’t
surprised me what he’s been able to achieve since arriving at IDW,” said CEO & Publisher Ted Adams. “IDW continues to grow and expand rapidly, and with this new role, Jerry will be an even bigger part of what we do.” 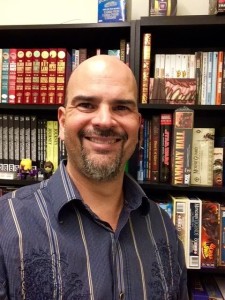 “It’s been a pleasure to be a part of IDW’s expansion over the past few years. Everyday IDW raises the bar on quality and innovation and I look forward to continue leading my team to even greater results.” said Bennington.

About IDW
IDW Publishing is an award-winning publisher of comic books, graphic novels and trade paperbacks, based in San Diego, California. Renowned for its diverse catalog of licensed and independent titles, IDW publishes some of the most successful and popular titles in the industry, including: Hasbro’s The TRANSFORMERS, G.I. JOE, MY LITTLE PONY and JEM AND THE HOLOGRAMS; Paramount/CBS’s Star Trek; Nickelodeon’s Teenage Mutant Ninja Turtles; Toho’s Godzilla; Twentieth Century Fox’s The X-Files; Sony’s Ghostbusters, Temple Street Productions’ Orphan Black; multiple monthly DISNEY titles; and many more licensed and creator-driven titles.

IDW Games publishes both creator-owned and licensed tabletop games. The division was launched in 2014 and has quickly found success with one of the top-selling card games of the year with the Award-Winning Japanese import card game, Machi Koro.

IDW Entertainment also has several active theatrical projects in development, including Zombies vs. Robots, which is in development as a major motion picture with Michael Bay’s Platinum Dunes and Sony.