Review: When last we left off Dante had accrued the wrath of a few of Las Vegas’s supernatural underworld leaders resulting in a fight that left Carpe Noctem near ruin. Chelsea, the new scribe, witnessed it all and wrote about it and proved her mettle alongside Jace and Jo. 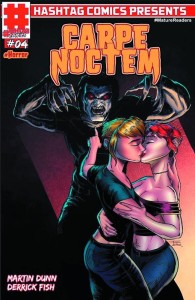 The zombie horde was a message and now Chelsea finds herself in a rather precarious situation and unsure how to deal with it.

Chelsea’s boss calls her first thing in the morning wanting a meeting and of course it’s also after the first sleep she’s had since becoming the scribe. Her story is unfolding nicely I have to say. Throughout this issue we see her become a stronger more self confident woman and we learn one important fact we previously didn’t know. She’s a lesbian and has a majorly hot girlfriend. Something she’s very fond of shoving in Dante’s face when he tries to take her home. The tension between these two is fantastic. After all it’s his fault she was made a scribe and he doesn’t play by the rules so naturally they are going to be butting heads constantly and as her new stronger personality emerges it’s going to be delightful to see them spar.

The whole concept here that Las Vegas has a supernatural underworld complete with bosses of various lineages makes for some great reading. I mean already we’ve seen one meeting take place with them all and the self-proclaimed Goblin King Isaac Bottwin well he’s looney tunes, seriously beyond cuckoo for cocoa puffs! Though you can’t discount a madman or goblin as the case may be since he’s been humiliated once too often for his liking and as we see this issue he’s going to go off the deep end in such a spectacular fashion.The whole thing makes him one of those characters that you root for, regardless if he’s the bad guy or maybe because of that. He’s the kind you want to see over and over again because he’s that fun as the mad hatter is.

We are also introduced to another character this issue a modern day Frank Sinatra, complete with mob ties of his own. He also happens to be among the supernatural beings living in Las Vegas but what kind you’ll have to read to see. Suffice it to say that you can be a Were anything these days, thank goodness. Though how he became what he is, is something I do hope we’ll eventually learn one day because that has to be one hell of a story in itself. 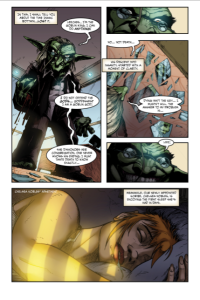 A lot of this issue is dealing with what happened last issue and pretty darn good characterization by Martin. Character growth and development that we see here make this even better than what we’ve seen so far and keep this series moving forward. Making it stronger, more fun and deliciously weird. It’s the end however where Martin manages to mix the characterization with actions that really pique a reader’s curiosity.

The creatures we see were interesting but it’s really Bottwin that steals the show here. Derrick really goes above and beyond the call of duty bringing this to life and it’s creepy good. Plus the way he manages to showcase Bottwin’s madness through his face and expressions along with Martin words really take this to that next level. Suddenly this goblin could star in his own horror flick and scare the living daylight out of anyone or anything.

While I’m still catching you up on the individual issues the trade is getting ready to hit shelves and I wholeheartedly encourage you all to order it now. This is the kind of story that starts off innocently and interestingly enough but soon takes that darker more terrifying turn into the realm of true madness.

Editor’s Note: To grab yourself a copy, head here!