Review: Now I will admit first off that my knowledge of Atomic Robo is spotty at best in a big way as I’ve only read bits and pieces here and there thanks to Free Comic Book Day. Though its thanks to FCBD that I’ve come to love what I have read of the character. 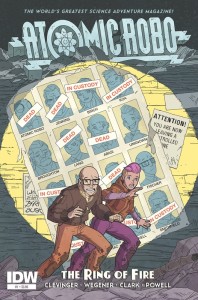 The Everything Explodes collection that came out with this issue along with other IDW goods this week helped to further my liking of the character and the world he inhabits. Now does my lack of knowledge hinder my being able to properly enjoy this new run where things aren’t exactly great for Robo’s friends? It does a little but I’m not gonna let that stop me from fully enjoying the book. I gotta say though, these Ultra/Majestic 12 guys just seem real shady to me.

With a mandate to put a stop to any scientific pursuit that could be seen as hazardous… Well to me that just seems like it would give them free rein to make that claim on any scientific happening. Especially if its something they themselves could use for potential military purposes. I imagine ol’ Tesla and even Robo himself would not be happy about this whole situation. Especially the fact Robo’s fellow scientists in the organization he’s part of having to stay hidden from this bunch to avoid jail time or whatever else they might have in mind for them.

I’m loving the cover for this book since its a nod to an older X-Men cover from back in the day. The art and colors in this issue is also something I’ve come to enjoy from the world of Atomic Robo the few times I’ve read it. As it is its own unique thing for it and I look forward to seeing more of Clark and Powell on future issues.

While Team Science is on the search for Robo and possibly an intervention for Bernard’s drinking habit, Majestic 12 is up to other things like twisting arms and being all worried over some biomega situation. Whether or not this makes them good guys for wanting to stop it is up for debate but if that’s the plan then I think they could have gone about things differently. I look forward to seeing where Brian takes this story next, especially the potential crazyness Team Science has to deal with in finding Robo. Something I imagine Majestic 12 won’t be too happy about should they learn of it!

Atomic Robo: And The Ring Of Fire #1

Summary: Atomic Robo disappeared two years ago when Tesladyne was invaded by Majestic 12 and transformed into ULTRA, a task force leveraging the U.S. surveillance and military industries against scientific pursuits deemed to be hazardous. Now, the few remaining Action Scientists finally have a plan to find Robo, but they’ve got to dive deep into ULTRA territory to do it! (And meanwhile, giant monsters from the sea might destroy all of civilization.)