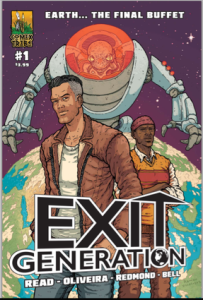 this is an interesting little offering. In the not too distant future Earth’s population has grown too much and the planet is just unable to support the vast amount of life. So the starting point for this story is 2025 and from there we see a progression of how life on Earth is. With rationing of food, water and supplies to rioting, looting and martial law declared life has become hard. It’s not an unrealistic point of view either and that’s kind of what has the strongest appeal about the premise.

So Earth’s top minds come up with the Extraction by Interstellar Transport Project, EXIT. Build a fleet of space arks to find a new home capable of sustaining human life and colonize the stars. Sounds reasonable right considering it’s the entire world working together to do this. Naturally there isn’t going to be enough room for everybody, and not everybody wants to go either it’s not like the planet is doomed or anything this is an overpopulation scenario not a doomsday one.

Along the way we see Matthew and Olivia get married. Matthew volunteers to help build the arks. By 2030 EXIT Project is 87% complete and by 2034 it’s time to go. Only Matthew’s wife Olivia doesn’t want to go and he leaves without her, and it turns out she’s pregnant. She’s worried about raising a child all by herself which is logical considering all that’s happened in her lifetime. Meanwhile in space we see Matthew and the direction the fleet is going in.

Cut to twenty years later Matthew and Olivia’s son’s twentieth birthday, he is what I am assuming is come to be known as the EXIT Generation. The first generation born after the exit happened. Life on Earth is very different than it was before but however some things remain the same. Jack craves excitement, adventure something to beat the humdrum existence of life and let’s not forget the old saying of be careful what you wish for because you just might get it.

I am very impressed with the storytelling here. I like how this first issue introduces you to what’s happening and the state of the world and it’s transition from overpopulated to underpopulated and how that’s changed how people are. The dialogue between Jack and Mo, basically brothers as Mo’s mother and Jack’s were best friends and well Olivia isn’t around anymore so he was raised by Mo’s parents. This is great stuff it engages the reader and really finds a home where you can relate to the characters and each point of view we see.

When Earth is visited by an alien race is when things start to get interesting. But you’ll have to read this to see why. Just know this; Mo’s family, and Jack’s too, have been taken by them and now it’s time for Jack to have the adventure and excitement he craved in trying to save them.

Caio and Ruth’s work on the interiors here reminds me of classic Nickelodeon cartoons. That not really scary or creepy alien though it is because you allow your mind to make it so kind of effect. The characters are great and have life and personality and the use of page layouts, panels and backgrounds when necessary help keep moving the story along at a nice pace in synch with the writing. Oh and Jack with his kind of Mohawk and good looks yeah he’s a great main character!

This is another shining example of why I love Comix Tribe. They bring us something that we have kind of seen but put their own twist on it and make it fresh, interesting and exciting.

Editor’s Note: Head here to grab up a copy!

Summary: It’s 2055. Ninety percent of the world’s population have abandoned a resource-depleted Earth in search of a better home in the cosmos. Those left behind find themselves in an unexpected paradise… and Jack is bored out of his mind. He dreams of action inspired by 80’s movies and punk rock. But when a legion of carnivorous aliens arrive, Jack learns you should be careful what you wish for… 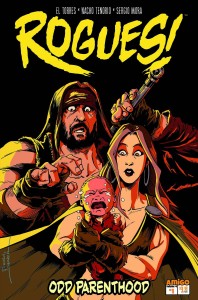 Summary: Their boldest job up to now, to break in the most guarded palace in Gerada, had an unexpected outcome – an insufferable baby!

Now its been quite a while since I’ve read anything related to the Amigo title known as the Rogues! And there’s no doubt in my mind I’ve missed out on quite a bit of great content cause of that too but I will be making the attempt at some point to fix that. One of the main things about Odd Parenthood’s first issue is the amusement through out it as El definitely has a good grasp of comedy right along side the seriousness in his writing. Weasel getting puked on right in the face by a little baby boy was damned amusing for me though I doubt I’ll find it amusing if it ever happens to me. I can imagine what sort of influence Bram and Weasel would have on the kid as he grows up if the King allowed it to happen. And of course that’s assuming he makes it to the end of this storyline thanks to the mechinations of a real shady broad who needs a good lesson or two in being humble. That’s definitely something I look forward to seeing happen and I bet El is gonna have a pretty darn great way for how that’ll get handled.

I am curious though on why the guy who saved the king’s little boy would even know to put him in the excellent hands of Bram and Weasel considering both of them likely have no experience with babies. Could be he’s heard of their reputation or he just knows something that he feels makes them suitable to the task. Either way its something I hope we get to see explored as this story goes on. For those of you who’ve already read through this likely already know so please, no spoilers!

Its nice that El and his creative team don’t hold back on certain types of adult content and that its not even really a focus over the story itself. The Brides of Battle and their interesting choice of outfit wear makes me wonder what made El decide to run with that since its not exactly a good way to keep yourself protected in a fight unless they are just damn good to avoid getting a hit on themselves. Hell I wouldn’t have minded seeing those three ladies again in the future since they certainly managed to keep our two heroes on their toes! Probably a good thing though that little kid is way too young to remember any of it since he’d be in strong need of some therapy for awhile!

Also loving that the wizard that the bad lady has seems more worried about getting yelled at then anything else which is among the things I found fairly amusing about this issue. Here’s to hoping however that yelling is all she does! If you aren’t reading Amigo Comics by this point in time, why not? As you’re only doing yourself a dis-service as El and friends prove that damn good storytelling is NOT dead! 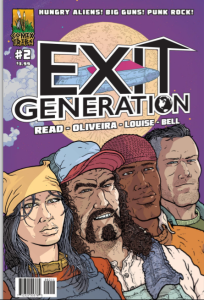 Summary: To rescue their loved ones from the insatiable Ruleians, Jack and Mo seek the aid of a pair of antisocial outcasts, and get way more than they bargained for. Meanwhile, the humans trapped in orbit by their hungry extraterrestrial kidnappers find an unlikely ally…

Alright so last issue was an amazingly good introduction to the series. We saw how the series got it’s name, what events led up to our hero becoming well, a hero and how the world they live in works now. We pick up right where we left off, thankfully because it’s always nicer to do that than at another scene and a brief flashback to how they got there. Sam’s writing is solid and I appreciate the route he’s taken here.

So I really like Scrap, whatever his name was before he is what he does. This big ole mountain of a man with the hair, the stache, and the ballcap yeah it’s one of those great visuals that totally meshes with the personality we get. I like this kind of synergy or collaboration we get between writer and artist. Of course Scrap is going to help the boys but not out of kindness or anything altruistic, for a trade of course can’t do something for nothing after all. I wonder how long it is before that attitude changes or if it will.

Ah, on the Mothership in orbit around Earth, Mo’s parents are well let’s just say feisty about being taken. I still love that these aliens are like something we’d see out of classic Nickelodeon cartoons, the high quality ones before the current crap animation took over. It’s like they could be from Jimmy Neutron or Planet Sheen, of course pre-2005 cartoons from them did rock the most! The idea that the humans are going to be sampled yeah that’s kind of awesome. I mean c’mon you’d think more than a few would like to find out if the Earth were one big market to pillage for things to eat.

we go back to Earth to meet Hana who it seems is Scrap’s… adopted daughter. Oh, she’s a pistol this one and I like it. Total “Happy” from Scorpion vibe going on here, tough as nails equally mechanically gifted and a mouth that would do a sailor justice. From here on the boys have this complete I dunno I wanna say “The Right Stuff meets Armageddon” feel to it and it’s just freakin amazing how much fun you will have reading this.

Meanwhile we meet a rather odd member of the invasion species. Turns out he’s a vegetarian, or to quote Lexie a veggiesaurous, and this has made him different and an outcast among his own people. When I say different look at him and you’ll see. I like the drama that they have in space though to be honest that they aren’t freaked out more, the adults at least, does surprise me some. Sure rolling the punches is normal but an invasion from an alien species that wants to put you on the dinner menu might not be handled this well by all these folks. Just my observation but this is comics and they need to be strong to survive right.

I am really enjoying this. There’s so many familiar elements and feels going on here but it’s being done in this way that makes it totally unique and original. The writing, characterization and plot advancement are spot freakin on. The interiors are perfectly suited for the story and I can totally see this being an animated feature movie through their work.

Comix Tribe is a company I urge you to explore and read their offerings because you won’t find this kind of passion for what they do everywhere!