glance, Donya Todd’s Buttertubs would be perfect for kids but once you get to reading it, you quickly find out that’s not the case at all due to the swearing. Now there’s not a whole lot but there is some through out the title amidst the nonsensical happenings that just happens as the lead character and her ‘dog’ Buttertubs makes their way to a princess’ birthday party. A princess that ol’ Buttertubs seems to like a lot and whether or not she feels the same way is anyone’s guess. Which would be really weird and disturbing as well. I am curious as to how Buttertubs started to sweat butter instead of water and I wonder if Donya may do more of this that covers that. Though one thing I will point out is that he looks nothing like a dog at all and maybe more like an overly large weenie with a few extras on him. You gotta admire his willingness to help out when someone is in need. Even if it doesn’t exactly go that well.

I am going to be honest however, I am not a fan of the art at all and the story itself. The art didn’t really have much effort to it other than making sure you could tell who was who unless there was a lot happening in a panel and then it could be kind of hard. The writing itself just has things move on from one thing to the next with no real resolution to anything that had previously happened. Like Buttertubs catching someone on fire for example. Now normally I’m pretty much a fan of just about anything I read but this is one one of those rare exceptions where I wasn’t really able to enjoy it and I hope the next thing Donya does is a few steps above what’s seen here. 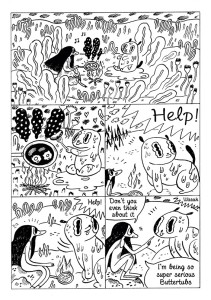 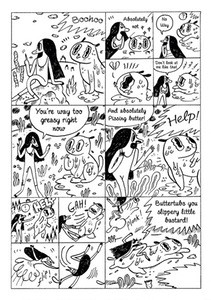 Would I read anything further involving Buttertubs? I’m on the fence about that so who knows what could happen there. Would I recommend this to you guys? Only if you are looking for something in no way serious and plenty nonsensical. Especially in how the main princess reacts to the events of her party. But hey, at least she’s happy right!?

Summary: Buttertubs is a dog who always wants to save the dudes and damsels in distress, but who always mucks it up on account of his inability to stop sweating butter. Running becomes flailing and crashing, everything he touches becomes greasy and strangely flammable, and even simple tasks become fraught with slippery danger. His nemesis, The Hotdog Queen, needs to watch her back, his friend Hester is always trying to stop his foolish escapades, and there are many, many damsels in distress. All in a day’s work for Buttertubs!