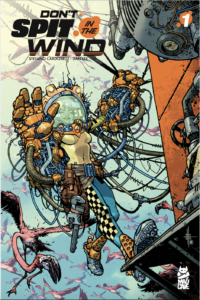 NOV. 16, 2022 (PITTSBURGH, PA) — Mad Cave Studios is proud to announce it’s first creator-owned title, Don’t Spit In The Wind, the forthcoming Dystopian/Sci-fi 4-issue series written and illustrated by Bram Stoker Award Winner Stefano Cardoselli (Heavy Metal) and colors and letters by Dan Lee (Gifford the Clown, Choo-Bots); cover B by Zach Howard and Nelson Dániel. Follow Travis and the Atomic Bros Inc. cleaning crew as they work to clean up humanity’s final act—and get to the bottom of their crew’s mysterious disappearances!

In the distant future, humanity has escaped the shell of what was once a lush, beautiful Earth, that has instead been left a dumping ground full of trash, smog, and pollution.

One man’s trash is another man’s living. Since earth became inhospitable, humanity escaped ages ago to live in a space station floating above the atmosphere. Now Travis and his crew of garbage men are tasked with cleaning up mountains of toxic waste, working for a company called Atomic Bros INC., to create a ‘Clear World’. But when one of Travis’ crew members goes missing near an old nuclear facility Travis’ job becomes a bit more complicated. 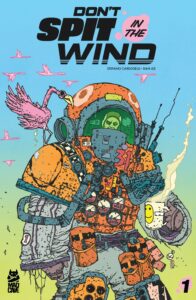 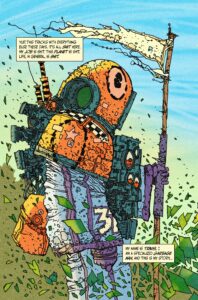 “Every comic story I write and draw is always an immersive experience,” said Stefano Cardoselli. “Like going to the bottom of the sea without oxygen coils, fun and challenging at the same time.”

“Working with Stefano on Don’t Spit In The Wind, was a no-brainer. His creative energy and speed is very infectious and I enjoy the challenge of trying to keep up with him,” said Daniel Lee. “I really hope the characters, world and themes of this story hits readers the same way it did me when I first read the pitch. It can be enjoyed as a fun sci-fi romp, or a grizzly premonition of the planet’s future. Either way, it has been a pure joy to try and make the trash-filled world Stefano has created look as beautiful as possible.” 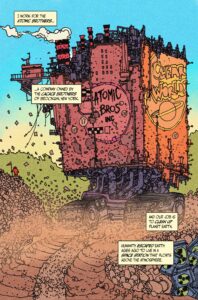 Don’t Spit In The Wind, is currently available on the Mad Cave Studios website for pre-order, and will be available in comic shops and digitally March 29th, 2023.