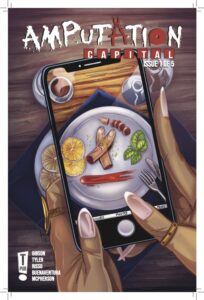 This upcoming title from TPub Comics and coming to Kickstarter this August is something that I’ll say right off the bat is a grim reminder of how far Fame and the desire to make that Dollar Dollar can make some people go. And in this case, getting a piece of your body chopped off to potentially get your Hollywood career back on track in some manner is pretty damned disturbing and an aspect of that reminder. But for our main guy Alfie, he’s a real go-getter who doesn’t have time to think about the moral aspects of the whole thing and you’re torn between liking and disliking him. Though I can honestly say I didn’t feel much sympathy for him towards the end of this first issue. Its also interesting to note that a genre for this title is listed as Dystopian and honestly, I don’t really see it. But perhaps that’s because I’ve seen a lot of material where things in the future don’t look great for one reason or another and things in this title aren’t like that.

But perhaps its Dystopian in the sense that Alfie and the company he works for is essentially allowed to do what they do to Celebrities and what not and nobody gets in the way of that? Which makes one wonder how that happened to begin with. And as I mentioned before, Alfie’s a real go-getter type, to the point he barges in on a meeting he’s not invited too. All because he’s out to get higher on the food chain for the company he works for, even if he’s not necessarily qualified in the eyes of some. But he’s never the less willing to put in the work to get what he wants, even if it is at the expense of others. Now, as we get to see, Alfie finds himself in an unfortunate corner as this first issue draws to a close and its all another reminder of the fact this is not a story for kids to be checking out. Or the easily squeamish for that matter due to the graphic scenery Andre Risso does so well that we see when Alfie gets confronted by a few individuals. Where things go from the end of this first issue is something I’m looking forward to see and do be sure to get on board when the Kickstarter for this launches in August!

Editor’s Note: But if you don’t want to wait until the Kickstarter, check out the GlobalComix page for Amputation Capital! Which features the first three issues!

He has no problem convincing actors with waning careers to sell their body parts to his company, Skin Deep. His biggest purchase yet, the ring finger of recently divorced superstar actress, Morgan Mainor—a great victory, until a group of anti-skin activists called the Phantom Pain Project pay Alfie a visit, kick his head in, and force-feed him the two-million dollar finger on camera.