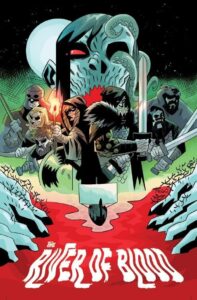 Vikings, the year 996 A.D., Lovecraftian Elements, and a dash of Religion… Oh my! River Of Blood is a title that was successfully funded on Kickstarter at the beginning of the year and blends Action, Adventure, and the Supernatural pretty well. It also pretty much (Yay!) ignores Romance too and that’s nice to see since that Genre is so damned prevalent in EVERYTHING! Though it kinda seems like Sean Fahey was leaning in that area a little but ultimately left it alone. Wulfgar and his merry bunch of fellow Vikings are a bunch who you can’t help but like despite some of their rough edges and won’t hesitate to stab you in the gut if the situation requires it. And those are two things a village situated near the Volga River in Medieval Russia are in definite need of for one reason or another. ROB also helpfully taught me about the Rusalka, which is from Slavic Folklore and these ladies are not ones you want to mess with whatsoever! Comics, always teaching you at times, gotta love it!

Carlos Trigo’s art and Jok’s colors do a great job in bringing this book to life, especially the fast pace where the action scenes are concerned that you might have to go over more than once to fully take in everything. I’ll also say that I love that while Sean does touch on Christianity and its building dominance of the world at that time and the unkind views it ultimately causes some to have, he doesn’t let it become a primary/preachy subject and I’m happy about that. There’s even a conversation in this book between Wulfgar and Erik where they discuss the usefulness/importance and or lack of of Religious symbols and the way its handled is just really great when it could’ve easily gone in another direction entirely and again, Sean handles all that really well in my view. I’m also kind of curious if the design for Aldrick took inspiration from Motorhead’s own Lemmy as well for that matter or if that’s just not the case at all. Either way, Aldrick for the win! 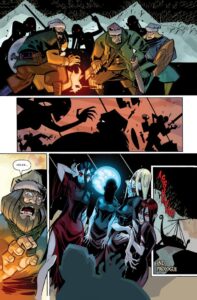 And while Bram can easily be seen as a big brute, the fact he will have your back even if he thinks what you’re doing is a bad idea, shows he’s definitely more than a big brute. The world, especially around this time, can be a cruel place and some of its people being so as well. Ivan being one example of this (and how Ancient Forces will use this to their advantage) and its amazing his eldest didn’t turn out like him and her mother. Which is also a saving grace in the end for Wulfgar and his bunch and as well as the Rusalka nicely enough. I’m curious to see if Sean and the team will return to this world with Wulfgar and his band, especially considering what we see the Rusalka getting up too now that Ivan’s been properly spanked. I’m sure Wulfgar and the others won’t be too happy what those ladies are doing once and if they find out. I’m glad I had the opportunity to check this out and I definitely recommend it to others.

Summary: 996 A.D. Dark and mysterious forces plague the Volga River, the lifeline of medieval Russia. Countless ships vanish in the dead of night. Many others drift aimlessly down river, their decks stained with blood. Their crews…nowhere to be found. Some believe the river cursed, haunted by spirits of the damned. Powerless against this scourge, a small village enlists the aid of a band of warriors from the North. But as the Northmen sail down the river in search of the shadowy source of the terror, the cruelty and depravity they discover force them to question their values, their faith and the very nature of good and evil.