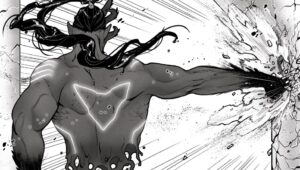 These two cool folks are a pair pulling off triple duty as a married pair, parents, AND as Comic Book creators! Toben’s been part of the Mind Meld in the past and now, his wife joins him in this interview with the Racicots! 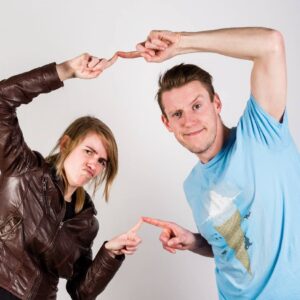 Its Alaire and Toben!

1. Hello there and welcome to the Mind Meld here at IndieComiX! Now this is Toben’s second time here at the Mind Meld so he needs no introduction so with that in mind, could you tell us a bit about yourself, Alaire?

Alaire Racicot: Heeeey! I’m Alaire, born and raised in the dusty part of Washington state, now a resident of Canada. A double agent, if you will. I’m a new mom, a long-time gamer, and eating french fries is my most favorite, most unhealthy pastime.

Alaire Racicot: It was an accident. A happy accident. And a snack-ccident cause man, we’d be workin’ late into the night makin’ comics and the vending machine snacks were cheap!

Toben also literally chased me across campus to my apartment to ask me to make comics with him when we first met ‘cause he thought my art was nice. I’d say I felt bad for him in his desperation, but I was also desperate for friends being new to the college scene.
He had cool hair, I had half a shaved head. We were two ambitious punks that belonged together. It made sense.

Toben Racicot: The classic line I give is, “I met a really great illustrator, but her rate was too much, so I married her instead, it seemed cheaper.” There is truth to that, but more seriously, Alaire and I became really great friends while collaborating on early webcomics. We’re both very creative people: Alaire likes painting, sketching, and doing Play-Doh, and I was into music, I really like cooking, and graphic design. PLUS we are really nerdy with interests like D&D, video games, and sitcoms. And, probably most importantly, she likes the stories I want to tell. So all in all, it worked out quite well. 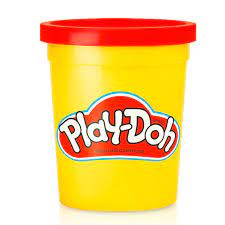 3. Speaking of comics, you two recently finished up a successful funding on Kickstarter for the second volume of Crown and Anchor, how’s that make the two of you feel?

AR: Relieved! Typically I’m super excited for Kickstarters, and am not bothered by the slog after the first week, but it was challenging keeping myself together with how much it fluctuated the next three weeks! However, the last 2 days we finally went over that hill and everything was okay again. I felt I could have done more, but I may have died if I tried. There’s always lessons in doing kickstarters, whether they succeed or fail. I already have a huge list of things to offer for the next campaign, and things to change or do. 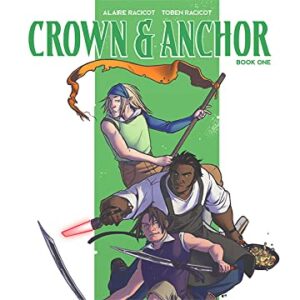 TR: Kickstarters are never easy, they are never consistent. We were funded within 24 hours, and then it was a long month of cancellations, interviews/reviews, and just trying to get readers interested. I’m more glad that it’s over. I feel like making comics is easier than marketing comics.

4. For those who didn’t have a chance to pledge to the Kickstarter, are there other ways to get a copy of the book?

AR: As a physical copy, no. We don’t have a shop or anything. Financially it would not benefit us just ‘cause charging for a book will probably cost just as much as printing it one at a time. It’s so easy to order too much inventory, so we offer digitals! We tend to only offer physicals during campaigns. That way we know exactly how many we’re printing and aren’t sitting amidst a sea of boxes full of comics. We already kinda did that a long time ago with a previous comic, and we’re still working through them four years later.

But I mean… ya’ll have until April 2022 to request a copy before we go to print! Send me an email!

TR: The trades will be on Comixology and we are thinking about setting up a Gumroad or something that is easier to get the PDF to readers. Digital comics are the easiest to stay up to date with our stories. But those interested in physicals, sadly waiting till the next Kickstarter is the best we can do. If we have any leftovers, we will include a tier in the next Pilgrim’s Dirge campaign.

5. For those who aren’t familiar with the world of Crown and Anchor, what can y’all tell us about it?

AR: It’s a story about a bunch of young folks trying to grow up and also not get killed as they continue to piss off everyone around them – starting because they accepted a job and received a ‘reward’ they should not have. But also, y’know, pirates and gods and adventure and finding your tribe and forgiveness. It’s our love of adventure films, cartoons, books, and shows all wrapped up in a chaotic swashbuckling package. 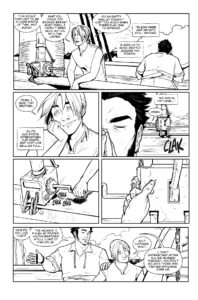 TR: Crown & Anchor is a sci-fi fantasy adventure. It’s highly inspired by One Piece and other manga, as well as Treasure Planet. As I was writing it and became a DM more D&D influences came in, and we play with some mythology.

6. Considering current issues with shipping and supplies, is this going to be an issue for the two of you when it comes to the physical rewards? 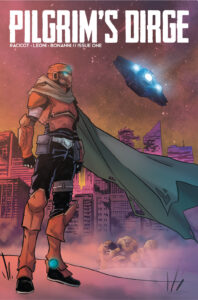 AR: We’re sad some of our favorite kind of paper is currently in jeopardy, but we’re hoping things will clear up next year. But that’s a small thing that we can easily fix! Shipping, thank goodness, is not an issue like it may be elsewhere.

TR: Not that I can foresee. We haven’t had any troubles with previous campaigns. The shipping company we use is great and orders arrive to backers REALLY quickly.

7. What projects are next in line for each of you?

AR: Finishing up the last two issues of Sidequest with Comics Heartthrob Grant Stoye and Magical Mystery Machine Martina Bonanni. Uncaged Goddesses (a playable fan-made book with modules featuring reimaginations of D&D goddesses) is coming out in January 2022 – I did a goddess illustration for that! In full freakin’ color! Then… another thing I can’t talk about yet. Then when THAT THING is done, it’ll be Crown & Anchor Book Three. So uh… I’m busy for the next few years I think. You can’t see me right now but my legs have turned into puddles.

TR: Pilgrim’s Dirge #2 is coming next year. Sidequest with Grant and Alaire continues and then I’m lettering a pile of books: I Have Eyes Only For You, Odd Yarns, In the Land of the Dragon, Discordia, Journey to the Top of the Food Pyramid, and others that haven’t been announced yet.

8. The two of you are pretty much self-published with the use of resources like Kickstarter and ComiXology and as well as potentially Gumroad to get your books out to readers, are there any plans to go beyond that to make it easier on yourselves where distribution is concerned?

AR: It’d be nice to try to get in with Diamond at some point, but Kickstarter is working well for us at this time, and is still the most affordable way for us to get comics to folks. To stores though, yeah, Diamond would be great! It would definitely get eyes on our work where we can’t. Perhaps in the next few years we may look into it and be more serious about it, cause we’ll have more content available.

TR: We’ve talked about getting involved with Diamond. I looked into it years ago, not sure if things have changed, but it was pretty simple back then. That’s the main option we’d use to have more outreach for physical at least. 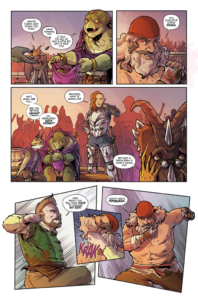 9. Are there any plans to potentially try out for Mad Cave’s Talent Search Contests and or submitting to other publishers in the future?

AR: I’m personally a little shy about publishers at this time, and contests aren’t a for-sure thing. I don’t have a lot of time for unsure things. If you wanna do it and it’s your thing, go for it! I like working on my own stuff too much… sometimes.

TR: I honestly think we’re too busy with our own projects. I’ve done some talent searches and contest things in the past, and I dislike them. They’re not a good use of my time, but I know others who have found great success with them. As for submitting to other publishers: when I began making comics I was very set on linking up with a publisher and doing that. Nowadays, I’m totally content using Kickstarter and sharing with those that are interested. That doesn’t mean we won’t try, but for now, we’re focused on Crown & Anchor and Pilgrim’s Dirge.

10. Given that the two of you are married and as well as parents, is it difficult to balance family life and comics creating? 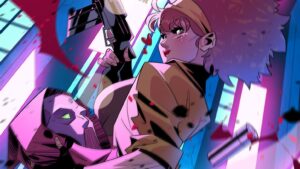 Art From In The Land Of The Dragon

AR: YES. I have significantly less time for comics. All my energy is well-spent on our kid and I love it. I used to draw a comic page a day (mind you, I don’t color), sometimes two days if I was feeling particularly spent or lazy. Now it can take up to a week if I decide I don’t wanna work in the evening. For Crown & Anchor Book Two, I’m workin’ evenings for a while. I’m grateful I can be a stay-at-home mom and make comics, because I love both, even if it means our comics just come out later than they used to.

TR: Yes. Becoming parents really was the most challenging addition to our creative work schedule. 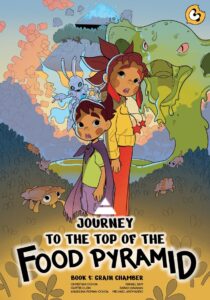 11. Given that Digital is making itself more and more at home, especially given the recent shortage issues, do you think it will overtake Print completely?

AR: I don’t think so. Digital is easier access and cheaper, but I think a lot of folks are still collectors and appreciate their tangible media, myself included. There will always be something special about a book you hold in your hands and fill your bookshelf with.

TR: Not completely, no. I was once at Random House in New York on a school trip and I asked them this question. They said they monitor sales very closely and print is always ahead. They also mentioned that to print 50k copies is basically as expensive as printing 100k. Basically, it’s not how many you print, it’s just turning on the machine that dictates the cost.

What I worry about are LCS’ disappearing and that side of the business going away. The shop I first bought comics from survives because of Magic The Gathering. A shop in Alaire’s hometown is basically this nerdy paradise that’s a staple in the community. And our local ones now seem to be really struggling, and it’s sad to see.

12. As for my final question, what advice would the two of you give to those looking to get into the Industry?

AR: Study and copy the comics you love if you wanna learn comics. Then once you learn all the rules, go break them and make your own stuff. Go do it right now. Don’t dote on a publisher or “perfect opportunity” – the perfect opportunity is right now. It takes baby steps, panel by panel, but once you get going, you’re gonna fly.

TR: Stay fit and have fun!

Editor’s Note: Huge thanks to Alaire and Toben for taking part in this interview!