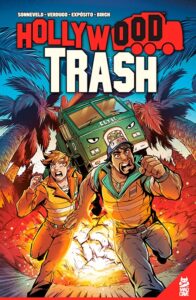 Ah, Hollywood, the land of famous people and such. The land where you can even secretly pull off having a cult unless someone screws it up for the whole bunch. Unfortunately, not even in the land of Hollywood is garbage getting anywhere near glamorous. But for James, newcomer/Vet Billy, and the garbage truck affectionally known as Clyde, that’s alright for them. And for those of you who don’t know, Stephen Sonneveld was among the 2019 talent search winners and Hollywood Trash is his first title for the Mad Cave world and I have to say, he did a FANTASTIC job from start to finish. Its also pretty nice to see Mad Cave venture into the less serious side of life and that’s another reason I love this book so much because of the concepts it has. Concepts that while a little goofy, does have some seriousness to it. Even if Pa-Pa’s real reasons for going after our trash boys in the end is ridiculous as Hell and I imagine James would probably be a little less guilt filled if he knew the real reason for why Pa-Pa kept trying to get him and Billy killed.

Pablo Verdugo, Jose Exposito, and Justin Birch all did fantastic jobs in their roles on this book in my view. Though it does seem kind of odd that James and Billy don’t really freak out about everything they keep experiencing. But it does at least save time by allowing us to move on to the next part of the story. Granted, I do have to wonder how everything will effect Billy mentally going forward due to his time in the Military and the potential PTSD he may have from that period of his life. 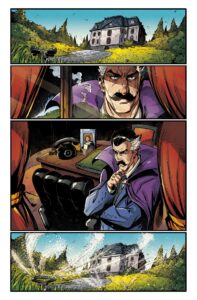 I have to say that every time Andi was shown in this book, I couldn’t help but find her to be absolutely beautiful and the fact that rehab actually helped her out is a wonderful thing too as she’s such a great character. There’s a potential mystery where her mom is concerned and I’m curious to see if that’ll be explored if Stephen decides to do another story in the world of Hollywood Trash. And I hope he does as I’m curious to see what other zany craziness could happen to the boys and what kind of consequences James may have to face after what happened towards the end. I loved the takes this book did on certain real life figures and this book also goes to show just what can unfortunately happen to one when greed over takes them. Even if it was shown in a nutty way but that’s part of this book’s charm. I hope we’ll see more books like this from Mad Cave in the future as Hollywood Trash is proof that they can do comedy just as well as the seriousness in each genre they’ve so far touched on.

Summary: Ah, Hollywood! Famous for celebs, sun…and murder cults! The Privy Council is the most exclusive club in town, headed by the entertainment industry’s top mogul, a ruthless exec who enlists his famous underlings to kill the people who stole from him, two local garbage men. James and Billy must survive one epic day of sword fights, forest fires, and giant mechs! At least there’s hazard pay.