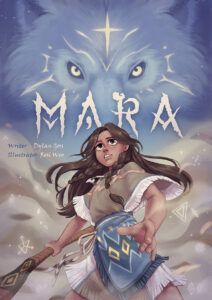 There is a lot to like in Mara, the setting of what seems like a Native American fishing tribe, some cool wolf spirits and an interesting protagonist who we will follow through this story. The story itself is very much a quick origin story but it works well enough. The art by Rosi Woo, is immediately unique and became my favorite part of the experience reading this. The art is effective but fairly simple until we get to the spirit world where the art turns from standard browns and tans to dream like hazy blues on clouds. This is where “Mara” the comic finds it’s Unique hook in the character of “Amaruq” a wolf god and guardian of this tribe. When an attack comes to the village, He isn’t likely to take that lying down. But the way he fights back is in a way that shocked me a bit morally. Which leaves some interesting directions for the story to go and I am along for the ride.

Now for the not so good… The dialogue. I don’t know if it was just because of a bad translation since this story will be in multiple languages or if this was meant to be like this. However the way people talk is simply not believable. Characters seem to be exposition dumps in ways that just sound forced. Also one particular expositional word balloon puts a slight plot hole in the mix which is never addressed. Which is a shame because I think the foundations of this story written by Dylan Goss is actually quite interesting but I fear that it may never be explored in an introspective way I know the story can do.

That being said there are also a few times where the art falters and things get a bit muddy. Especially if there are multiple people on screen in an action scene but these are nitpicks. The overwhelming coolness of the premise and the art overall is a bloody good time, with at least 3 genuinely beautiful pages and a great line spoken by our protagonist that while heavy handed is truly thought provoking. I am hoping the next issue of this comic will show me where this character goes and how this character will fight the evil approaching her.

Editor’s Note For more on Mara, head here to the Stuffed Rock Studio. You can also visit their Twitter, Facebook, and Patreon pages as well!

Summary: Unwilling to allow the last of his tribe to die, a guardian wolf spirit descends upon Mara, taking her from a young girl in a small fishing village to an avatar of revenge.