10 years is a long time and a lot can happen within that time frame. Something two time interviewee Kevin LaPorte of Inverse Press knows quite a bit about! So with that in mind, come join us to see how things have been for Kevin and Inverse! 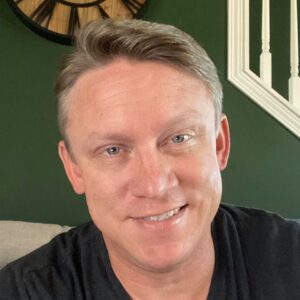 1. Hello there and welcome back to the Mind Meld here at IndieComiX for a third time! (Wild applause is heard) How the heck ya been!?

Hey, Rob. Been great! Crazy busy with the Squared Circle Comics wrestling line we launched in 2016, in addition to our usual horror offerings, but that’s a good kind of busy. We’ve produced and published more comics than I ever could’ve imagined.

2. When we last spoke, it was around the time of the 3rd issue of Flesh of White’s Kickstarter, Clown Town, the Eyes of the Hurricane, and the first issue of Last Ride For Horsemen, just to name a few. Flash forward to now and you’re getting ready for the 10th anniversary of Inverse Press with a special gift for fans. How does ten years feel?

Ten years is just hard to wrap my head around. It seems like just yesterday we first got our hands on those Clown Town trade paperbacks, and we’re now on our third edition (now re-titled Vicious Circus). But it’s been a happy and productive decade, and we start decade number two in a really good place, with our titles in more stores and online sales outlets than ever before and with more titles queued up for publication than at any point in our history. It’s extremely exciting, and we’ve got big plans for a 10th anniversary Kickstarter campaign that will feature an Inverse Press 10th Anniversary collector’s box that will include a foil cover edition of Clown Town #0, with brand new cover art by Amanda Rachels and opportunities to get original editions of some of our original and most rare books. 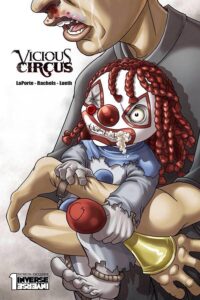 3. As I’m sure many are wondering, when will the 10th Anniversary Kickstarter start?

We are looking at mid-August for launch. Printers are all slowed down because of pandemic conditions, so we want to fulfill our last Kickstarter – for The Comic Book Encyclopedia of Pro Wrestling – before launching our next campaign. But we are rolling out the artwork for this baby already. The box art is out, and the Clown Town #0 cover will be out there later this week.

4. Sounds awesome! And speaking of Wrestling, what made you guys decide to add Wrestling to the line up Inverse has?

In 2016, comic writer John Crowther approached us with an opportunity to publish a comic on the life and career of Hall of Famer Nikolai Volkoff, based on actual interviews with Nikolai, and we jumped on it. The campaign was very well received, and we quickly found ourselves on a very fun and fulfilling mission to tell the stories of these incredible athletes and entertainers. It’s been a blast, and we’re still doing it four years later. 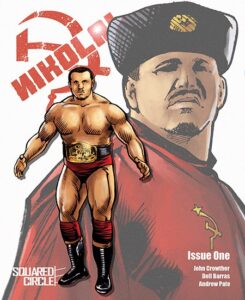 5. As an Independent Publisher, how much of an impact has the current Pandemic made on you?

We’ve been very fortunate. Oddly, the only big effect of the pandemic for us has been delays in printing. Otherwise, we’ve actually seen improved sales and crowdfunding efforts, as people need distraction from these unbelievably strange and stressful times and look to comics and other entertainment.

6. With the Pandemic currently going on, what do you personally see happening for the comics community in the near future?

What we’ve seen so far is more reliance of innovative and proactive retailers on the indie comics community. Inverse Press has certainly put more books into shops in the past 4 months than possibly in the previous 9 years, with the exception of our partnership with Cosmic Times to distribute Scales of Time and Flesh of White via Diamond Distribution. I hope that proven trust between indie publishers and retailers continues to flourish, as Diamond continues to flounder during this difficult time, and the new distributors are just getting their feet wet, creating more work for retailers.

7. Once the Kickstarter comes and goes (with it being a hopeful success!), what’s next for Inverse after?

The delays in our crowdfunding launches have created a backlog of content, so we have books ready to go! First up are a couple of wrestling comics, The Killer Bees and Gangrel, followed by Last Ride of the 4 Horsemen #0 and the next chapters in Vicious Circus, the first new long-form material for the title since 2015! We’re also launching a Squared Circle YearBox initiative via Patreon, for which Patrons at the $10/month tier will receive a custom collector’s box for 2020-21; a full print subscription to every Squared Circle title we publish from August 2020 – August 2021; three guaranteed specialty books, including a Gangrel sketch cover by Amanda Rachels, a foil cover edition of a book (to be decided), and a Patreon-exclusive cover edition of a surprise title later in the year; plus a Patreon-exclusive Squared Circle title (a surprise announcement SOON) that will be digitally published two pages/week on our Patreon page before the print edition is done. 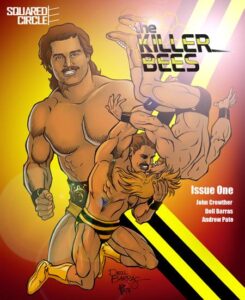 8. You mentioned earlier that Clown Town went through a name change to Vicious Circus, what brought that about?

Clown Town was a workable title, but there was no real meaning behind it. It told the reader there were clowns in the book, and it rhymed, but there was no depth. So, in 2015, after many years of deliberation, I came up with the title Vicious Circus, which is a play on the psychological term vicious circle, a reference to the cycle of abuse. Since our killer clowns target child abusers, it made sense and has a ring to it. Our buddy and collaborator Gavin Michelli crafted an amazing logo, and we were off and running.

9. Given that it took a Pandemic for Diamond to finally have its hold on the distribution of comics to crack and allow for at least two new Distributors (Lunar and UCS) to come forth, do you think they and any others will be around long term? Or do you feel Diamond will make a come back? 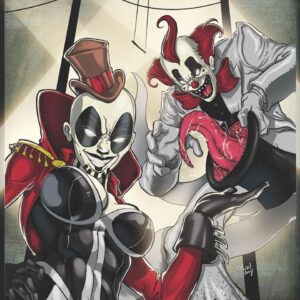 It’s hard to say, especially since we’ve never done business with Diamond (as a publisher) or the other distributors. However, I think one can speculate that we are now in a very dynamic distribution environment in which change is at hand, and the changes are likely going to continue. Unusual circumstances that negatively affect businesses, for better or for worse, open up the playing field for innovative and opportunistic competitors. It will be an interesting few years in comics, to be sure.

10. Given your mentioning the use of Patreon for Inverse, would you say its been a rewarding experience?

We’ve had a progressively rewarding experience with Patreon, particularly with the Squared Circle line, where we offer digital and print subscriptions and opportunities to be drawn into each and every issue we publish. We currently have the most Patrons we’ve ever had, and we have big plans for growth there, with the launch of a Patreon campaign for our horror comics line coming in 2021.

11. With various platforms like Netflix, Hulu, HBO, and Disney Plus all creating their own original content and or using content from comic books, which one would you feel would be best for Inverse titles to be adapted for their streaming services?

Wow, that is a question I’ve not given a lot of thought to, as it seems like such a big dream to achieve. Thematically, though, I think our out-there horror concepts and mature bent makes us much more of a match for Netflix content than the others. To binge watch a full season of Vicious Circus or Last Ride of the 4 Horsemen on a Friday is something we’d love to see. 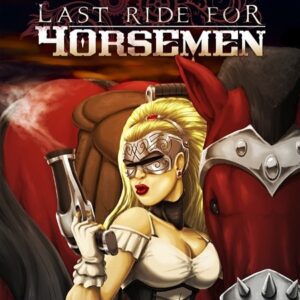 12. You mentioned the Kickstarter for the 10th anniversary will begin in Mid-August, do you have an exact date for when it’ll begin so folks will be on the look out and get their pledges in early on?

Unfortunately, the printing delays for our last project make it impossible to set an exact date right now. It was supposed to launch 2 weeks ago. We will update you as soon as we know exactly when that Kickstarter campaign will launch.

After ten years, my wisdom is this: if you want to make a comic, take the time to find the collaborators and build the skills and learn the steps to make it happen. If you do it for the art and for yourself, t’s worth it, and you’ll never regret it, even if no one else ever sees it.

Stay up to date with all things Inverse by hitting the like button on their Facebook page!