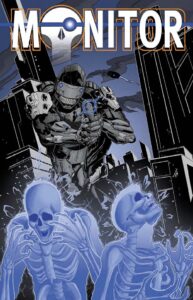 MONITOR is a high concept cyberpunk adventure that seems to draw heavy influence from the the likes of Blade Runner, Minority Report, Psycho-Pass, and the original Ghost in the Shell movie. A story drenched in the theme of monitoring the masses in the interest of single self-preservation. You’re every move, every thought, every. single. aspect. of your life is scrutinized and placed under a microscope. And over time as this becomes the norm, those who break away from it are only ever thought to be deviants.

While it isn’t a unique concept the way the Wampler approaches this setup does FEEL quite unique as he puts more focus on not only how one is effected psychologically by breaking away from a uni-mind society, but also puts more focus on the actual computers controlling people. Generally we see human proxies for the computers, or the creators behind the computers acting as the villains. In this book the computer IS the villain and you get to see their prejudice in full force. 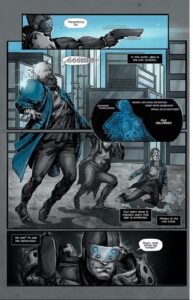 The story is broken into five chapters with each having a beginning, middle, and end to them so it feels like you’re getting five full issues. It feels very rewarding in this regard because there’s a lot more story here than you originally might think there’s going to be and Wampler uses every page wisely to pull out as much as he can from the characters and the narrative.

The characters all follow a bit of an action movie path for most of the story from campy one-liners to even surviving incidents that would’ve killed someone normally but instead they come back even stronger and more durable than before vowing revenge on the one who put them in that situation. It’s fun, but also funny at times for better or for worse. 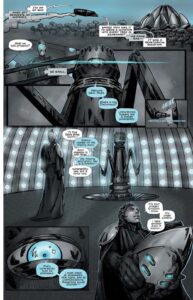 Towards the end, however, the dial is ramped up to eleven and that’s when the real high sci-fi stuff comes out. The stuff I really enjoy with beautiful full splashes of art in the final pages and some fun experimentation by Wampler with the letters in correlation to their surroundings.

While I do enjoy the book, the biggest gripe I unfortunately do have with it is that much of the revelations and even some of what happens in the final pages feel convoluted to me and out of hand. As if Wampler wanted to have twist build onto twist build onto twist until in the end I’m left looking at some pretty pages but I’m not entirely sure what I’m looking at. What… was the point?

But speaking of pretty pictures, Mkheidze’s art is gorgeous throughout much of this book. Especially in the aforementioned splashes towards the end of the book. She’s very good with action and camera work as there’s some very fun shots in this which gives the book a movie feel to it. I do feel she struggles with faces, however, as there are moments when I desperately feel like Eric in particular doesn’t have the same face in the book. 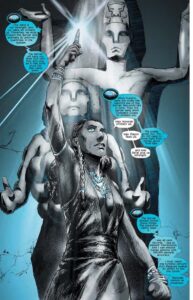 And as there is a subplot regarding faces that I don’t want to go into too deeply, I’ll use as example that there is one scene in particular that is a flashback where Eric looks like a completely different ethnicity than what he looks like at the beginning of the book and it really threw me off.

Any griping aside, however, the book is overall pretty solid. It’s a fun cyberpunk mystery and if that’s your thing I recommend this book. It tries a lot of really cool stuff and genuinely I can’t speak enough praise for what all transpires in the final pages of the book that really makes the story soar and feel like it’s taking big swings.

I respect any book for taking big swings in its story and makes it feel bigger and brighter than how it began.

It isn’t perfect, but it’s a lot of fun! Wampler & Mkheidze are comic book creators to look out for!

Editor’s Note: Interested in checking out MONITOR for yourself? Then head here!

In the country of Seaboard, you are connected, or you are deleted. The Server rules over all, and those who would choose to live as Disconnects find themselves hunted by the Axons. These elite soldiers have one task: to protect the integrity of the network. Follow Eric, a rogue Axon, and Talira, a disconnected radical, as they race to escape the heavily-policed city-state and find freedom among the free-born peoples living on the fringes of society. Explore the ideas of connectivity and what freedom truly is. Who makes the truth and what does it really mean? Who decides your fate in a world where computers know your every action and desire before you do? What would you sacrifice to be free?