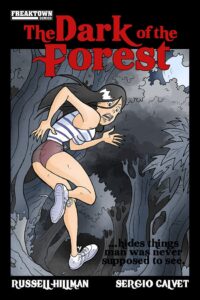 Slasher films and Horror movies that feature powerful monsters have been a major part of Cinema History since the beginning of the Silent Film Era, which started the trend of modern day movie viewing. Going to the theater is still a major family event that sometimes takes days to plan. First dates and friendly outings rely on great movies to facilitate a night of fun and excitement. Among all the film genres available such as Action, Romance, and Thriller, none have surpassed the test of time like Drama, Comedy, and yes of course, Horror. We love Horror films, and we don’t care if its Halloween season or not, a great Horror story can be appreciated at absolutely any time of the year. So if we love them in film and classic novel form, why not incorporate these classic styles of stories into the world of Comic Books.

The Dark of the Forest is a very interesting tale with a nod to a classic Horror film franchise setting. The title alone makes many suggestions that “things are not going to go well in the end.” If you like to go camping, that means you probably love to sit by the campfire, and enjoy a drink and a story with your best friends. That is usually the beginning of any camp group’s first night. As fans of horror, we always take bets on seeing how many nights in total these friends will survive. If you enjoyed the original Blair Witch Project, you were in constant anticipation of what “can” happen next. The Dark of the Forest is a very simple and straightforward story. Seven friends embark on a weekend adventure that involves great times and bird watching. These nature lovers wanted to see some of the rarest birds around, and were determined to complete this goal despite the local townsman’s warning. Now when you look at the cover of this book and see the basic illustrative design, you might get fooled into thinking this is a children’s story. But I encourage you to listen to some of the best words of advice: “Don’t judge this book by its cover!”

Although it may appear to be “kiddy/cartoonish”, this is no children’s comic. In fact this comic series is anything but. There is a large amount of adult content including; graphic violence, mature language, and yes nudity. There is a lot of nudity! But what else would you expect when you consider this to be a Horror movie about teenage campers. The main “Monster” in this story is bit of a mystery and the way this story ends will leave you in shock, or tears, or both. Will any if not all of these friends live through the night? Will anyone live to tell the tale of what they witnessed? And who is the strange man from the town the group stopped in? The Dark of the Forest is a good read if you want to be entertained while trying to get through a busy commute. It is not a complicated story, and that is a good thing because sometimes complexity kills characters, plots, and the story as a whole. This book will deliver a satisfying quench to your thirst for blood and gore. I liked it, and I hope you will too.

Editor’s Note: You can pick up a copy of The Dark Of The Forest at the Freaktown Comics website or at ComiXology!

The Dark of the Forest – One-Shot
Freaktown Comics
Written by: Russell Hillman
Art, Letters, and Colors by: Sergio Calvet
Reviewed by: Adrian Richardson

Summary: It all started out so innocently.

Seven friends set out on a birdwatching weekend in the middle of the Navarre forest. Little did they know that while they were watching the birds, something else was watching them. Something that wasn’t human. Something very protective of the forest, and willing to kill anyone that gets in its way.

Freaktown Comics brings you a desperate tale of survival, humans united against a mysterious and deadly predator in a bloody battle to the death.