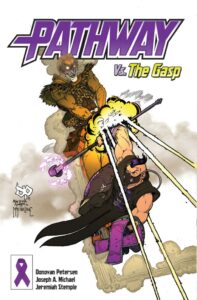 Cystic Fibrosis is a life threatening and hereditary disease that affects roughly 30,000 people in the US with 1000’s more diagnosed every year. Its a condition that currently still has no cure but thanks to the advancement of medical knowledge over the years, those affected by it are capable of reaching their 30’s, 40’s, and beyond. Cystic Fibrosis is the subject matter mixed with Super Heroics of Pathway #1 from Jeremiah Stemple, Joseph A. Michael, and Donovan Peterson. However, I will say that unless you are aware of what the intended premise is actually about before hand, you may come out of this reading experience thinking this is just another attempt at starting a new Super Hero styled comic and therefore, attempting to make a mark in the comics world. Of course (in my case) it helps to read location settings in the comic more than once so feeling confused or thinking a certain way can be avoided.

Jeremiah himself is someone who is dealing with Cystic Fibrosis himself and Pathway #1 is one way for him to try and bring more awareness of the condition to those who might not exactly be aware of it. And as well as give those with the condition, a hero they can relate too. Now I’ll admit I wasn’t exactly impressed with the villain of the story known simply as ‘The Gasp‘ as he could have handled things in better ways rather than going the villain route. Especially when his kid needs him more as a father, rather than as a villain. Yes, it can be frustrating when things aren’t going as you hoped they would. Especially when a hospital refuses to help your kid for whatever reason but going the bad guy route just isn’t a good move. Especially when its not something your own kid needs in any way.

And to me, while Dr. Pathway is the titular hero of the story, I honestly see Lil Gasp as the real, true hero here. He does what Pathway and the Police aren’t able to do despite the fact he’s sick and in a wheelchair. And he does it with words that makes your heart want to melt.

Now, as I mentioned previously, unless you’ve read up on all the need to know information related to the comic (and paying special attention to detail in the book) before actually reading the book itself, you’re probably going to be unaware of the fact that our main character has Cystic Fibrosis himself and again, think this is just another attempt at making your mark in the comics world with your own superhero character. Its not even alluded to in the pages of the book either for that matter and that’s something I’d probably keep in mind for the future if the creative crew intends to do more with this idea as well as expand with other characters beyond Pathway. We just know he really loves the kids he’s helping and hates that they are suffering while also secretly dubbing as a Super Hero. There’s no origin story and honestly, that’s actually fine.

As you don’t always need to include that in a first issue and I’m glad they chose to keep the focus over all on the story we see in the pages of Pathway #1, but mentioning a key detail or two is a good idea. Something that even could have been done during one of the panels we see of him as he’s amongst other people at one point.

It should be noted that Pathway #1 also had a successful funding on Kickstarter with it making 1,772 dollars over its 1,500 dollar intended goal. Which is a great thing and shows that there are people who truly give a damn. I don’t know what the creative team has next in mind when it comes to bringing more awareness of Cystic Fibrosis through comics and providing those with the condition characters they can relate too, but I do know I am looking forward to it. And if you yourself know of someone who has Cystic Fibrosis, be sure to show them this title!

Editor’s Note: Be sure to check out and like the Pathway Facebook page to stay up to date on all things Pathway! Which is due out either this month or in January!

Summary: Pathway is a hero desperately searching for a cure for cystic fibrosis. His nano-suit extends his own life, but he must race to find the cure to save those he loves. But trouble comes along when the villain known as ‘The Gasp’ comes calling…