It’s been months of talks, rumors, and slow business moves taking place all year long, but the time has finally come. All Elite Wrestling is finally on American Television thanks to the deal made with Turner Broadcasting and the TNT Network. AEW can also be seen in over 21 different countries around the world via Cable, Satellite, or the Internet. The buzz, the hype, the expectation, and anticipation have all been met with great satisfaction and appreciation. This is what wrestling fans have been waiting for. It’s been almost 15 years since there was any form of “true threat” to the WWE Empire. We can talk about TNA, New Japan, and AAA which have all done their best individually, as well as a monster combined unit. 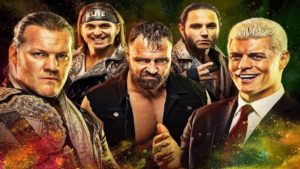 But even as a united team force, fans tuned into more WWE content in comparison to the efforts of this mega group. But today, now more than ever, when the fans complain about the lackluster performances or storylines, and tune in to WWE RAW and SMACKDOWN at their own leisure time, with ticket sales and international viewership at an all time low, it seemed as if the “Pro Wrestling Boom” that started in the 1990’s famous “Attitude Era” was almost at a final end. The once great fire and flame became a simple bit of smoke and amber, until now. AEW is already being called the “Savior of Modern American Professional Wrestling”. 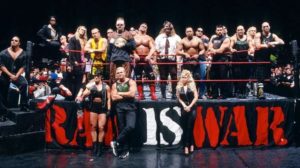 On October 2, 2019, Dynamite debuted on TNT, which averaged 1.409 million viewers, which made it the largest television debut on TNT in five years. Also on October 2, NXT would make their two-hour debut on USA Network (the previous two episodes featured the first hour on USA with the second hour on the WWE Network), and they averaged 891,000 viewers.

You hear that? Saviors!

Dynamite beat out NXT in viewership and more than doubled its competition in the key adults 18-49 demographic, scoring 878,000 viewers compared to NXT’s 414,000. This would also mark the beginning of the “Wednesday Night Wars“. Prior to and after the episode, untelevised matches were filmed to air on AEW Dark on the following Tuesdays on AEW’s YouTube channel. (Info source; Wikipedia)

As of today, there have been a total of five AEW Dynamite shows on the TNT Network. The matches are absolutely awesome. Not just entertaining and hard hitting, but the talent and pace of matches are beyond anything currently on Monday Night Raw, which has focused its attention more on the “backstage” rather than the “in-ring” value as of late. Not to mention the increase of commercial breaks during any “really good” or “Main Event” match. WWE RAW used to pride itself on being able to end the last portion of the show with zero commercial breaks and going at least 10 minutes over the scheduled show time limit. But unfortunately, all of this has long been a thing of the past.

I couldn’t tell you which matches to look to immediately watch because they are all exciting whether you know the character or not. I find myself to still be an “Old School” wrestling fan, which means, if you don’t have “the look” then you automatically suck! I grew up with 80’s Wrestling and the Vince McMahon’s “Larger than Life” characters on TV. But there is a new generation once again, and this new breed that started with ROH, TNA, and many other “underground/indie” leagues, are now in the main event thanks to WWE’s version known as NXT. It is not ironic that it is these two shows (AEW vs NXT) that are going head to head. 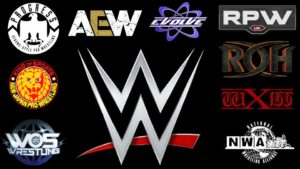 The smaller, more athletic, younger, gifted high flying technique, and hard hitting striking skills of these athletes are bringing back wrestling fans every single day. The “Wednesday Night War” is officially on and poppin! I lived through the original “Monday Night War” and it was awesome. The birth of the NWO in WCW verses DX in WWF/E had everyone in the world talking. T-shirts, toys, and video games were absolutely unavoidable. I’m old enough to even remember the time that Pro Wrestling was a “Regional” thing, or what some refer to as the days of the “Territories”. But having seen it all, and thinking there is absolutely nothing left that you can call “new”, I am excited for the simple reason of wondering what’s going to happen next.

AEW has already done a few things different. They employ a “Win/Loss Record”, which has never been on full display before. They renewed the focus on a “Match Time Limit” which forces the feeling of urgency to win your battles. AEW likes to use fireworks/pyrotechnics, which has somehow always been a huge part of big shows in Pro Wrestling. Notice how funny it is to see this suddenly back on RAW and SMACKDOWN for the first time in years. Like TNA, which was known for its “non-stop action”, AEW is more focused about what is happening in the ring, as opposed to the backstage, or behind the scenes.

They have good stories and are placing attention on building up their entire roster instead of using everyone to only help build up the top guys. They like to say the word “wrestling”! And the commentary team will actually focus on the moves being performed rather than just pushing along the latest storyline.

So far AEW has had a few title matches including the World Heavyweight Championship. They have introduced two brand new titles (Men’s Tag Team and the Women’s Championship) via great tournaments and memorable matches that had a few surprise endings. It’s so refreshing to see and feel a sense of unpredictability again in wrestling. I have so many friends and know so many people that all think they can “predict what’s going to happen next”, usually followed by, “even I can write this shit”.

AEW is what is right for wrestling today. They are doing everything you wanted to see done in WWE. Its no surprise that there are so many rumors of wrestlers all looking to make their way to this new brand of Pro Wrestling. I admit that I thought this was a joke and that AEW would never succeed, but so far it’s doing well, which means I was wrong. So please don’t be a “Classic Jaded Wrestling Fan” and give AEW a chance. The worst thing that will happen is you spend a little time away from Social Media.