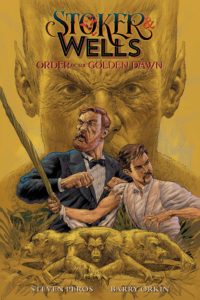 Hey o! Its Bram Stoker and H.G. Wells, Stoker and Wells, Wells and Stoker, S and W, and any other variation I can think of in their very own tale best described as a Buddy styled one straight from near the end of the 1800s! Many of us have heard of Stoker and Wells for years in one way or another. Whether its because of shenanigans like Dracula, Time Travel, Invisible men, Doctors with islands, Ladies with shrouds, and White worms, we’ve been wowed by their creative imaginations and seen several of their stories adapted for the screen to further the wow. Although, there for the longest time, I thought Stoker was ‘Stroker’. There’s been quite a bit of high praise for Stoker and Wells: Order Of The Golden Dawn and after finally having sat myself down to read the book, I can see why.

Its a fantastic read with great writing, art, lettering, and colors by the team of Steven Peros, Barry Orkin, Chris Summers, Studio Haus, Marshall Dillon, and of course, J.C. Vaughn’s editing. Heck, once I really got to reading, I didn’t want to put the story down as I wanted to keep reading to find out what happened next! Go Steven Peros for that! Now, yes, at first, you could hardly see Stoker and Wells as the type to be vibing the buddy vibes that’s so popular in things like Lethal Weapon’s Riggs and Murtaugh for example but its easily seen there the more they are around one another. The fact they evidently weren’t friends in real life back in the day is a missed opportunity as who knows, perhaps they would have had quite the friendship as their counterparts in this story! That’s something that’s so great about writing fiction that you can do that kind of thing and nobody really has trouble with it.

Unless of course, you’re a die hard stickler for historical facts being kept as they are. Order Of The Golden Dawn gives us a little insight to the Hermetic Order Of The Golden Dawn and one if its oldest members, Silas Embleton, insight that frankly leaves one curious enough to want to know more about both. Especially around towards the end there where Silas is concerned! We also get a little info on how there’s three sections to the Golden Dawn but the third one we sadly don’t get anything about and honestly? That also has me curious where that’s concerned and if whether or not it’ll be explored in the next book. Which, hopefully it will be! I love how Peros weaves the journey for our two main fellas that eventually gives us the two books we all know and love to this day.

I love that you can believe it happened this way and not necessarily question it cause hey, its science fiction all around! Heck, who knows, maybe it actually DID happen but the two couldn’t talk about it for fear of being locked up! But on the serious though, Steven Peros does a fantastic job with his take on how Stoker and Wells ended up creating the two books they are most well known for and I’m looking forward to seeing how his take on things furthers in the next story. The fact there’s very little to no romance in this story is another nice thing as well for that matter.

Editor’s Note: You can grab yourself a copy right here!

Summary: In London of 1894 a 20-something screw-up named H.G. Wells and a 40-something theater manager named Bram Stoker meet and have a thrilling, frightening, and extraordinary adventure that causes both men to finally step into the lives they were meant to live! It is this shared journey that leads to the creative inspiration for each writer’s first great success – The Time Machine and Dracula!