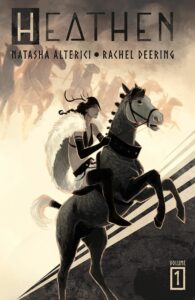 Oh my damn, this series is so good! If you haven’t read my review of the first issue go do so now. I’ll wait.

What drama doesn’t need a little comic relief? Chapter Two opens with two gods (or Wights, rather): the wolf brothers Hati and Skull, who spy Adyis’s horse Saga and foolishly decide it’s been too long since they’ve hunted. This scene proves that writer/artist Natasha Alterici can give us more than borrowed comic tropes. She delivers both drama and humor at an appropriate pace.

If you do not know anything about Norse mythology don’t look it up until after you’ve read Heathen. In fact, Heathen is a good inspiration for doing the research. Here, not only is the saga flipped on its tail, Brynhild’s emancipation from that circle of eternal flames is just the beginning. She informs our hero(ine) that the condition of her rescue is marriage. It is Odin’s curse. In true heroic fashion Aydis decides they’re just going to have to continue defying the King of the Gods and break his curse. That sentiment is more relevant today than ever. If society condemns you for what you are, siting “that’s just the way things are”, then you are going to have to be your own hero and change the way things are.

A note about the title “Heathen”. This may be a spoiler. Nothing that will ruin the story for you, but if you don’t want to know skip to the next paragraph: I am very pleased that Alterici worked in some actual history. There was once a widely held misconception that those barbaric Vikings wore horned helmets. It was never true. Christians spread hate propaganda of the Norse culture as demonic, depicting them in art with horns and calling them heathens. Again, this is relevant today. In the scene Aydis has made a horned helmet for herself, which Brynhild remarks on as something unknown to her people. Aydis tells her that it seemed appropriate. Brynhild asks, “Appropriate for what?” Aydis does not give an answer. It is only insinuated. But clearly the answer is: sometimes you have to be a heathen to be a hero.

Aydis meets Freyja, who Odin replaced Brynhild with. As the goddess of love Freyja is inappropriately amorous toward Aydis. She insinuates rape by the suggestion she “borrow” Aydis. But once Aydis awakens after being abducted, Freyja makes it clear her intention is to keep her from harm. The rest of that arch I just can’t spoil here. There’s a compelling backstory, intrigue, tragedy, and the kind of temptation any mortal would find impossible to turn down. Just know that when you read the lines, “Warriors don’t fight for themselves. They fight for those who cannot fight on their own” and “I want a power that’s my own. I want freedom. I want you” it may make you want to cry.

Natasha Alterici and her entire creative team deliver for Vault Comics, who just may be the best independent comics publisher of 2019. I’ve read a number of their titles. I am in love with Heathen, if you haven’t noticed. When so many indies have jumped on the superhero craze, oversaturating the market already ruled over by Marvel and DC, Vault is giving us something more than different; they’re giving us quality.

As for Aydis, I’m worried for her. She just provoked a god. And to make a change sometimes heroes have to die.

Summary: Aydis is a viking, a warrior, an outcast, and a self-proclaimed heathen. Aydis is friend to the talking horse Saga, rescuer of the immortal Valkyrie Brynhild, and battler of demons and fantastic monsters. Aydis is a woman. Born into a time of warfare, suffering, and subjugation of women, she is on a mission to end the oppressive reign of the god-king Odin.