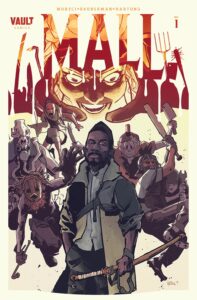 First, I just wanna say that after finishing my read through of this latest Vault offering, I feel more like I just read something from the Black Mask gang. And I don’t mean that as a bad thing at all. More like a good comparison considering the balls to the wall ideas they have. Whether or not Michael Moreci and Gary Dauberman chose to emulate that or just chose to bring forth some wild shenanigans from their brains that the Vault crew decided would be a great idea to let loose remains unclear. But good Lord above am I glad they brought it out. There’s been a number of Post Apocalyptic and otherwise scenarios where groups of humans either live in bunkers, small towns, buildings, and what not. But I’ve never seen it done to the degree of what Moreci and Dauberman have done where a Mall is concerned.

Whole apparent societies living in a Mall that survived whatever the heck happened to cause life to go down the crapper for the world. And there being obviously a very fragile balance within this place too that like the world, could go down the crapper at any time. And from the looks of things, it seems like that’s about to happen and unfortunately for one Andre Reed, he’s smack dab in the middle of it. His being in the middle of it stinks like a dumpster filled with bad eggs on a very hot day in July. There’s obviously a very obvious suspect, but there could be more to it then the obvious we’re shown here. Especially after what we see in the beginning and what happens there would make for strong suspicion. Its got me excited to learn more about as the story goes on as Andre gets pulled deeper into the whole thing.

Its clear that going outside is a worrisome issue and going below is also apparently, a worrisome issue. Though whether or not there’s any actual truth to that in this world known as Mall, is something I look forward to finding out about when the time comes. In addition to Moreci and Dauberman, we’ve got Zak Hartong on art, Addison Duke on colors, and Jim Campbell on letters. All of whom are so far doing a damn fine job in their respective duties. Zak’s work on the character of Tess helps us see this chick is shy of a marble or two and not someone I’d want to meet in a dark alley. Or even in a brightly lit one for that matter. This August, this Mall is definitely where you’ll want to shop at!

In addition to Mall, there’s a special preview for another upcoming Vault title that was included in this little preview Adrian Wassel had awesomely allowed me a chance to check out. Known simply as The Plot by Daniel, Moreci, Hixson, Boyd, and Campbell. And judging from what the preview showed, this little jam deals with Mental Health. And maybe some Supernatural elements but this being a preview, that’s a little sneaky and thought provoking. Which makes me look forward to seeing what’s the what when the time (August 28th!) comes!

Summary: Here in the heartland of the U.S. of A., the world has ended! But worry not, because the mall still stands. And within the walls of this consumeristic mecca lies a new world order: box store tribes and name brand gangs, all vying for limited space and resources. So, actually…you can worry! Especially for poor Andre Reed, who, after the assassination of a tribal leader, has to navigate the mad haven to prove his innocence, and prevent the end of world, again! 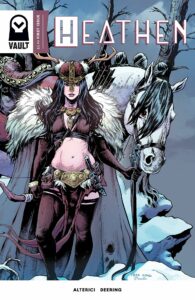 Quest of a Superior Warrior

Review of HEATHEN #1 by: David Paul

Summary: Aydis is a viking, a warrior, an outcast, and a self-proclaimed heathen. Aydis is friend to the talking horse Saga, rescuer of the immortal Valkyrie Brynhild, and battler of demons and fantastic monsters. Aydis is a woman. Born into a time of warfare, suffering, and subjugation of women, she is on a mission to end the oppressive reign of the god-king Odin.

I was raised by a woman; by a strong woman who endured many hardships, oppression and abuse. She suffered heartbreak over the dissolution of relationships, and heartache over the loss of a child. It was a woman who taught me the value of strength in confidence in oneself, and to fight for what is right despite everyone around you telling you differently. I have been waiting a long time to see this kind of woman portrayed accurately in comics.

That’s not to say we don’t have good representation of women in comics today. There are many creators and many characters. But for me, reading Natasha Alterici’s Aydis (the lead) was like watching my young mother. What I mean by that is, she’s authentic.

Aydis (re)introduces us to the old Norse folklore of Brynhild (a Valkyrie), who defied the orders of Odin and struck down a king he had decried would be victorious. As a result, Odin banished Brynhild and forced her to marry a mortal. She accepted her fate, on the condition that she choose a warrior worthy of herself. And so, she ascended Mt. Hinderfall and surrounded herself by eternal flames to await that one worthy warrior. It is every bit the intention of Aydis to be that warrior.

In this first chapter we meet Liv, perhaps a past love-interest who must now fight her own self-interests and natural desires; she is to obey her father and marry a man. When Aydis tells Liv, “There’s nothing wrong with you” Liv screams back at her, “They’ll kill you if you keep talking like that” there is a genuine sense of real-life dread of gender normative identity. As in, “you must be what we say you are or you are nothing at all”. Further, there exists the danger that “if you are not one of us you have to die”. In the world that Alterici has created that is real. Unfortunately, in our world (yes, still today) that is also real in areas all over the globe. A sad reminder that all are not yet equal.

What would a comic book set in a world of Norse gods be without a good trickster? [INSERT RHETORIC ABOUT MARVEL]. Not much fun, I can tell you that. Here we have Ruadan (another take on Loki?), who is more bark than bite. He appears as a bull, but Aydis easily overcomes him. He indicates, in his best trickster(ness) that Aydis may know who sent him – a mystery sure to unfold in later chapters.

Like all good comics we are left on a cliffhanger. Aydis climbs the perilous mountain and faces good ol’ fashioned hellfire. “All she has to do is jump.”

And that’s what you have to do. Jump aboard this title series from Vault Comics by Natasha Alterici right now. I can’t recommend this enough. Outstanding. Now all we need is that movie deal.