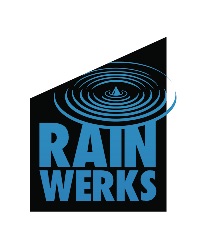 SUNSHINE BARBITO AND DÉBORA CARITA INTRODUCE MAFIOSA: AN ORIGINAL COMIC BOOK CRIME SERIES FUNDING ON KICKSTARTER!
Up and Coming Talent Team Up for Reimagining of the Mafia’s Rise to Prominence and Enduring Legacy Through Story of One Woman’s Refusal to Accept Gender Norms 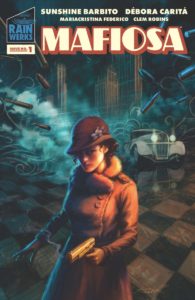 PORTLAND, OR – Portland writer Sunshine Barbito and São Paulo, Brazil based artist Debora Carita have teamed together to recreate the early days of the Mafia’s rise to prominence in New York during the roaring 1920’s through an original comic book story of one woman fighting to join the family’s business.

Mafiosa tells the story of Nicoletta Marchesi, the youngest of five children in a family of first generation Sicilian Americans who have established a Mafia family in Brooklyn, New York in the early 1900s. Nicoletta is a precocious and beautiful eighteen year old who, unlike her sisters, is very much a tomboy and grew up always challenging her two older brothers at every turn. But when Nicoletta confronts her father Tommaso and announces her desire to join the family business alongside her brothers, crisis ensues.

“While I’ve worked on many wonderful comics, I’m particularly fond of the character of Nicoletta,” says Débora Carita. “For an artist working in a historically male dominated industry, the story of Mafiosa is very relatable to me. To make your mark you have to do things differently in order to get noticed and succeed, and the dilemma is that those things can also transform you.” 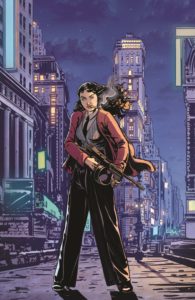 Mafiosa is not only the story of Nicoletta’s rise within the Marchesi crime family but how she and the world around her is transformed when she proves better at the deadly game than her male counterparts. Combining the mystic, high style romanticism of the Roaring 20’s with a woman’s journey into the savagery of the Cosa Nostra criminal syndicate, Mafiosa presents a fresh take on contemporary themes of gender discrimination and social justice.

Funding exclusively through this Kickstarter campaign is a self-contained comic book story, published in a 28 page, full-color comic format, written by Sunshine Barbito, and drawn by Débora Carita, with two covers available. For more information on perks offered, visit the campaign page. 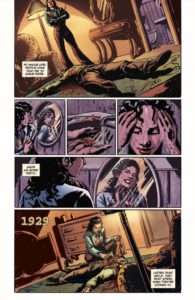 Sunshine Barbito is an up and coming writer and editor, based in Portland, Oregon. She writes fiction and non-fiction short stories, poetry, and comics. You can find her short story “The Injury” in issue sixty-six of 34thParallel Magazine, at 34thparallel.net. You can find another comic by Sunshine at 3kcomic.totalwar.com. 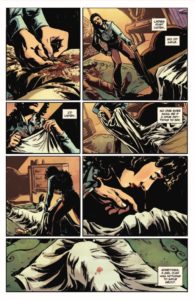 Mariacristina Federico was born in Naples on June 14th, 1983. She studied at the Italian School of Comics, taking courses on comics and animation. In 2005, she took part in a comics stage with Alessandro Barbucci. In 2010, she started working in the world of comics as a colorist for foreign publishers; French; Le Lombard, Glénat, Poil de Carotte, Soeur Marie Therese, American; Upper deck, Dynamite, Activision (Call of Duty), Interweb Comics (The Giantess), Glass House, Sugar Skull Media (Lucy the Scientist) English; Titan (Tekken, Assasin’s creed). Over the last few years, she has worked with some artists in the entertainment field, illustrating CD covers for singers, DJ’s, and pianists. In addition to working as a colorist, she is a freelance illustrator for private clients, mainly drawing curvy women. With these drawings, she has participated in group exhibitions in Australia and Brazil.

Clem Robbins has lettered practically everything, for practically everyone since 1977. He is the author of The Art of Figure Drawing, which was published in 2003 by North Light Books. His paintings and drawings are in collections all over America, and in the permanent collection of the Cincinnati Art Museum. 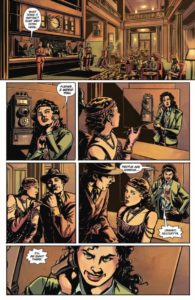 Kirbi Fagan is a Metro Detroit based illustrator who specializes in creating art for book covers and comics. Her illustrations are known for their magical themes, nostalgic mood and feminine heroines. Her work has adorned fan favorites for Marvel, Boom Studios, and many more!

RainWerks is a multimedia development studio based in Portland, OR. With a focus on creating and developing original IP, as well as working with both aspiring and established writers and artists, the company utilizes crowdfunded comic book storytelling as a proof of concept and market viability for developing original properties across multiple entertainment verticals; inclusive of streaming, film, and video game publishing.