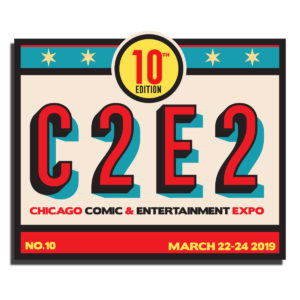 I have been attending the Chicago Comic and Entertainment Expo, or C2E2 for seven years now. Some years I get a full weekend pass while some years I would only attend a day. Regardless of which year I attend C2E2 is always a consistent mix of excitement and prestige as it has positioned itself as the premier comic con in Chicago. This year I decided only to get a Sunday ticket as I did last year, mostly to take in the sights and scope out deals on silver age key issues.

Upon arriving at McCormick Place I stepped out of my Uber and immediately saw Captain American riding on a vintage looking Harley Davison motorcycle as he drove past for pictures and applause. This was actually a cosplayer that goes by Captain Colorado. Captain Colorado is actually a non-profit organization that raises money for Cap for Kids, For those of you who are not aware Cap For Kids helps families of kids fighting cancer! He was riding on his 3rd annual “Cap Across America” in which he’s raising to a goal of $10,000. C2E2 was just one stop as he from state to state visiting children’s hospitals, monuments, and comic cons. Here is a picture of Captain Colorado. 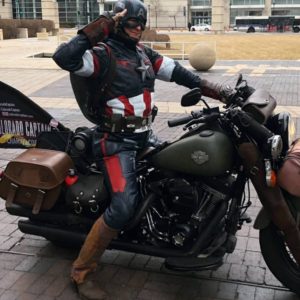 C2E2 is home to the Crown Championship of Cosplay which is presented by SINGER. This is the largest and most prestigious cosplay competition in the world so the cosplayer crowd takes their costume and prop creation very seriously. One of the greatest aspects of C2E2 is the awe-inspiring cosplays and the dedication of those cosplayers to craft their vision into fruition.

The other thing that has set C2E2 ahead would be a wide variety of celebrity guests. Most years when you ask an attendee what was their favorite moment of the con and their face will light up as they will respond with a celebrity or guest they got to meet. A story I heard a few times was about John Barrowman handing out cookies to fans that were waiting to meet him. The other crowd favorite this year was David Tennant known for having a lot of fun with fans during photos shots. Pictured here is my friend new friend Jasmine who sent me this picture. 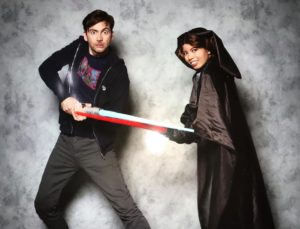 My favorite moments of C2E2 is always found in artist alley as I love to meet fellow comic creators and see the newest issues being pout our by BOOM! Studios or Devil’s Due. My one criticism with C2E2 is always in relation to artist alley and the lack of indie comic creators. As an indie comic writer myself I always look to support small press studios publishing their passion projects. Over the years I see less and less of these types of creators as more and more artists decide to just sell prints of their spin on established characters. This is a growing trend around a lot of different cons to meet market demand for these copyrighted character prints however I believe it does a disservice to the indie scene as well as the copyright owners of these characters. However my favorite moment this year is when I was able to meet Joel Adams the character creator for King of the Hill, still one of my favorite tv shows of all time. 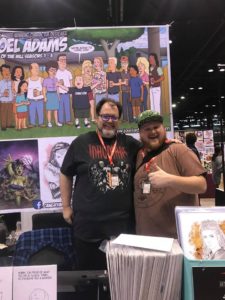 Over all C2E2 is 10 years strong and shows no signs of slowing down. Every year the guests, panels, and artist jut get better. With an attendance over 80,000 people C2E2 is one of the best cons in the Midwest and I bet the next ten years will be even better. Until February 28, 2020 have a great year C2E2.