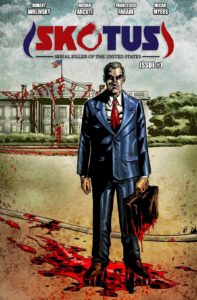 Satire of politics within the realm of comics goes back to the golden age and over the years it has mirrored the social consciousness of the time. As the political landscape becomes more volatile so the reflection within comics must become more vicious. SKOTUS is a brutal look at the nature of politics as a reflection of our divisiveness as a nation. It plays on the distrust we have for our politicians, through the sociopathic president that exploits his position to murder innocent constitutes.

Rob Wolinsky delivers a story of political intrigue that utilizes traditional horror and spy tropes to play off the social fears of the time. This first issue makes an effort to add as much plot as possible while setting up a familiar cat and mouse story arch with the police. I felt the choice to have the President still hiding his serial killing habits from his own secret service is a good choice by Wolinsky. Using a government conspiracy angle would have created a lot less tension and would have made the story seem dull. He avoids all that by having the President as a loan wolf for his own secret earning for blood. It was a surprisingly fresh take and I appreciate that he did not take the easy way out.

The art style is in a strict black and white with dashes of red thrown in there to make the violence more distinct. This is a clear contrast is an artistic representation of the racial tensions of the times and serves well in a deeper representation of the satirical nature of the book. Nicolo Arcuti uses shadows very well; his blacks are bold and allow the art to stand out on the page, as his work is reminiscent of Sin City. His panels have good angle selections as he tries to open up the scene to make it feel more immersive. I especially want to mention the most under appreciated team member the letterer. Micah Myers does a great job at lettering this book with good bubble placement and a excellent pace of dialogue. His lettering flows well with the panel placement and no panel seems over whelmed with balloons.

Overall, the story and art is rather straightforward and gives you more anticipation for what could be that what is actually delivered. This means that they accomplished what they would want for a first issue however it does lack in some substance. Though it does establish plot points doesn’t really establish any central themes with either the characters or the story. There is no political motivation to the murders and I would love to see more subplots established. I would be interested to see where the SKOTUS goes next but I might have to wait till he hits the campaign trail before he gets my vote. 7/10

Editor’s Notes: Currently, Rob Wolinsky is running a Kickstarter for the first issue of SKOTUS with 16 days left to go. The project is currently at 4,023 dollars of its 6,500 dollar goal. 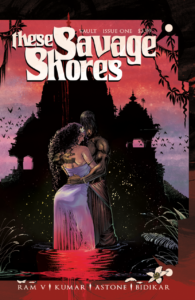 Summary: Two centuries after the first European ship sailed to the Malabar Coast and made landfall at Calicut, the East India Company seeks to secure its future along the lucrative Silk Route, in the year 1766. An old evil now sails aboard a company ship, hoping to make a home in this new found land. But he will soon find that the ground along the Indus is an ancient one with daemons and legends far older than himself. Along These Savage Shores, where the days are scorched and the nights are full of teeth.

I went into this with a certain set of expectations thanks to the summary, what I got by the end of my read of these three issues was something else entirely. And I can honestly say I am NOT disappointed that my expectations were completely destroyed by the end of the third book. The fact it wasn’t until tonight that I finally read Ram V’s These Savage Shores makes me want to kick myself because of how great this book is. Now, my only real issue with this title is Aditya Bidikar’s lettering when it comes to the letters that a few of the characters write to those they know. As cursive writing or something close to it isn’t a thing I’m a fan of at all as its difficult for me to read. Now I get that the time period this is set in would use that, so no worries there and over all, this is just a nitpick of mine.

Otherwise, Aditya knocks it out of the park with the lettering.

I also wasn’t expecting for Alain Pierrefont to go the way he did since I was honestly thinking he was going to be the main character here. Though whether or not he’s actually dead is another thing entirely and I’m curious to see if Ram does more with that. Lord knows there’s gonna be trouble when his people show up and if he isn’t as dead as things appear, let’s hope ol’ Alain will have finally learned his lesson! And while I find it slightly creepy that Bishan has known Kori since she was a little girl and evidently is in a relationship with her, I do love the bond they have with one another.

Its probably one of this book’s strongest points and I definitely wouldn’t mind reading more focused stories about Bishan and all he’s witnessed thanks to his immortality. I love that Ram weaves history and his own story together for These Savage Shores and does so perfectly. How all plays out where the ending of the third issue is concerned is something I am looking forward too.

Sumit Kumar’s art and Vittorio Astone’s colors are perfect together in my view. And while there IS nudity, its not overly done or pornagraphic. Lack of censoring in this area is good in my view as art shouldn’t be censored. That, and convenient blocking of nudity is rather silly at times. I’m curious to see how much more intense the artwork of Sumit is going to be as this story progresses as things are only just the beginning of the storm. Especially where Bishan and what happens to him is concerned! 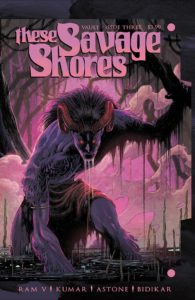 And special thanks to Ram for allowing me a chance to read the first three issues of his story and if you have yet to pick this up, don’t keep sleeping on it!