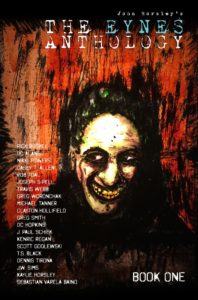 It’s a bit hard for me to call this review, as it’s more of a look-see into what’s already finished of The Eynes Anthology, with the acknowledgment that the book is yet to be finished and there’s more to come. The book itself will be made up of ten complete stories, and I’ve been given the pleasure to preview most of them.

From the beginning with the description, The Eynes Anthology promises something a bit different with its contents that not a lot of books do. While most anthologies cater to a specific theme, this one is challenging its creators to center their stories around a time-spanning narrative. A single family with a long lineage of monster hunting, and how they’ve completed this task throughout the ages. We get a peek into the Eynes family tree going back as far as the middle ages, then into what looks like the 1920s, and of course modern day, and so many other eras in-between.

I love these kind of stories that show evolution over time. That allow creatives to tell their own stories, but also assemble a full framework of which when you pull back at the end of it all you can go “Ohhh, I see what they did there!” It’s a cool trick and requires a lot of maneuvering and planning where all parties are concerned to pull it off.

Now, unfortunately a fair amount of what I was shown were unlettered pages and unfinished stories. After all, it was the PREVIEW book. So it makes sense. This means however that I can’t give a fair assessment of whether or not Eynes pulls off its grand ambition. But it does look promising, if anything none of the stories feel like they’re pulled from the same cloth. Very different styles for very different time periods and I think that’s great.

This does, however, bring me to the art side of thing. The acknowledgment of very different styles holds truer than ever here, with each story being presented incredibly differently along a broad spectrum. Admittedly, some comics look better than others, but each one has a charm that bleeds life into the narrative it’s representing. If each artist was the same, then there would be no variety, and that would be a real shame.

The Eynes Anthology from what I can tell is a solid first entry into the monster hunter genre, filled with so many creatives that are still starting out and making strong efforts to stand out in a competitive marketplace. I do believe the book is worth supporting on their Kickstarter that recently launched, and I cannot wait to see so many of the names in this book on even bigger projects in the future.

I can’t give this book a score for now, but from what I’ve seen I like it.

Throw your money at The Eynes Anthology, and support their Kickstarter, right here!

They always have been. They lurk, hidden in every shadow, behind every dark thought. They are probably in your closet, possessing your friends, and they’re almost certainly creeping behind you now. They are most often undetectable. And when they’re not, it’s too late.

Throughout time, these monsters have feasted on society – both physically and metaphysically. The chaos they bring fuels a great dark spirit that seeks to end the world with pain and torment.

The Eynes are our only hope…

The Eynes family line has been cursed since before recorded history to detect the presence of these monsters. It is their bound duty to stop these creatures from destroying humanity through any means necessary, be it by sword, spell… or other. Though the Eynes can feel when the creatures are in close proximity, the monsters themselves are also drawn toward the family.

But not everything is as it seems…

And although the war between the monsters and the Eynes has waged for centuries, The black-and-white battle lines have grayed over the years. Not all monsters may be considered evil and not all Eynes are as righteous as one would think.

These are the tales of the Eynes Family.