Sometimes, you just have to go big in what you’re looking to do. Whether its a movie, TV show, novel, or a comic book. And Daniele Bonfanti is definitely going big with his upcoming Graphic Novel ‘Unstoppable’! So if you’re curious and enjoy when things go big, then read on!

1. Hello there and welcome to the Mind Meld! For those who may not be familiar with you and your work, can you tell us a bit about yourself? 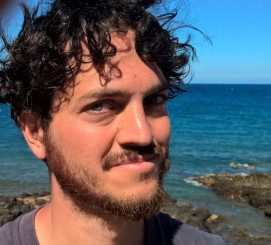 Hi, Rob, glad to be here. I was born in Italy and I live on a Macaronesian island (Spain) with my wife and daughters. I enjoy outdoors, endurance sports, and I write adventurous stories. I’m a science fiction and horror novelist, and I’ve translated fiction by heavyweights like Clive Barker, Ramsey Campbell, Stephen King, and many others – I find the alchemical process of translation extremely fascinating. I also wrote non-fiction about ancient enigmas and esoteric matters, and I’m currently working on a couple of board games.

This is my first comics project as a creator, after translating and editing several. Comics has always been my favorite narrative medium, and I’ve been studying its mysterious machinery for a long time, so I’m thrilled.

2. I can honestly say I’ve never heard of ‘Greatswordpunk’ until Riccardo reached out to me about ‘Unstoppable’, how did that come about? 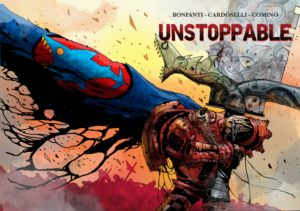 Ooh Lordy, what a big sword!

Yep, that’s because I made it up – as far as I know, at least (wouldn’t be surprised if somebody else used it before… lots of x-punks flying around lately). What can I say, it just came to me when I saw Stefano’s cover. Basically, I think everything he does is something-punk. It’s an attitude. Like a contamination, an infection of the best possible kind. We wanted to do an action-packed dark fantasy with weird esoteric tech and augments. That sword was really big. So the word came by itself: greatswordpunk.

3. You’ve got Stefano Cardoselli (an artist whose work I’ve enjoyed over the years) on board as the book’s artist, what cinched the decision for you on him being your book’s artist? 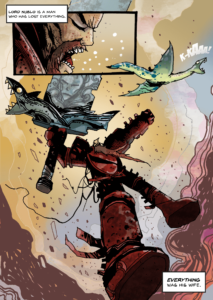 This is a story I’ve written expressly for him. I think he’s one of the artists with most personality around: you can always tell it’s his work at a glance – and that’s what I try to do as a writer as well, a unique style whatever you’re writing. So, I contacted him about a year ago with a script for a SF series. He liked it, but it’s very complex and large in scope, so we postponed it; meanwhile, I began working on some translations and editing for him.

One day, we were talking about another project, and out of the blue he said he wanted to do a dark fantasy with his young studio, ArmageDoom Factory – a two-men outfit: he and writer Andrea Amenta. He wanted something “really heavy,” he said, and asked me if I’d like to write it.

4. How did Patrizia Comino get on board for ‘Unstoppable‘ as the book’s colorist?

Stefano saw her wonderful work for Aftershock in Patience! Conviction! Revenge! He showed it to me and I thought her colors burst with energy. Just what we needed, colors that leap out of the page to bite you. So he gave her a call. She liked the general wildness, so she was in.

5. As ‘Unstoppable‘ is a Graphic Novel, is it intended for it to be a one and done story? Or will there be more to come in the world of ‘Unstoppable‘?

Yes, one of the main premises for this was to do a one-shot, not a series: a complete, satisfying story. That said, it’s an interesting world, so more self-contained stories in the same setting may come, maybe with different characters (not many of them survive). In fact, a reward of the Kickstarter is a peculiar spin off.

6. ‘Unstoppable‘ is currently on Kickstarter until March 17th in order to fund the graphic novel, is this your first time doing a Kickstarter? 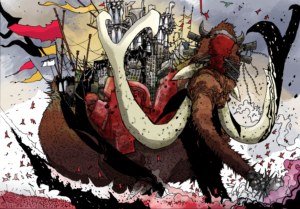 Yes. Fortunately, I’m not the one managing it. I wouldn’t know where to start – and it’s really not my thing. I’m a bit of a hermit (I still write on paper…). Stefano’s studio, though, has already done four successful campaigns, so they have experience. Most importantly, for UNSTOPPABLE they’ve taken aboard a dedicated resource as campaign manager (Riccardo, of BookSling): I think it’s a great move. It’s a complex job and you need skills to do that right. Skills that I certainly don’t have. Best leaving it to professionals while we do our job telling stories.

7. Can you tell us a bit about the rewards included for each tier of the Kickstarter? 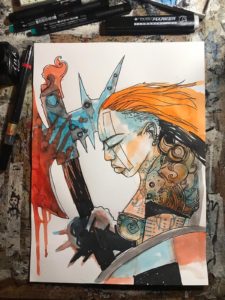 The basic reward is a special, limited edition of the book. That’s a non-commercial print for backers, media, and few others. Commercial editions will come later, when the studio sells the project to international publishers: so backers will get this early version way before Nublo reaches the comics stores with his big sword. There is also an interesting combo with another ArmageDoom book (Ballad of the Broken Heart, by Amenta, Cardoselli, and Devito) and signed copies of course.

While higher tiers include cool gadgets and original making-of material like original artwork, concept art, sketches and notes for the story. We also came up with an original one that I really like: a spin-off story in illustrated prose, hand-written by me and hand-drawn by Stefano, limited in five copies.

8. Considering Lord Nublo’s sword is so huge, in addition to other huge weapons and creatures that is said to defy panel spacing, are you worried this might turn off readers?

I’m sure it will turn off some, and I’m perfectly okay with it. It wouldn’t earn the -punk suffix otherwise. I’m also confident others will be captivated by exactly the same things – how we play with excess and exaggeration. I also think Freud would have a lot of fun with UNSTOPPABLE. Anyway, there are narrative reasons for it being so big (yes!); and: I see a lot of comics striving to look realistic, movie-like.

Nothing wrong with that, but what I love about comics is the potential to speak an altogether different language — like music. Non-realistic art. Different possibilities how things could be. Nothing is real, after all, just possibilities collapsing here and there like rain.

9. Would it be safe to say that readers are in for one Hell of a wild ride where ‘Unstoppable‘ is concerned?

I usually don’t make promises. But that much I can promise.

10. What inspired the creation of ‘Unstoppable‘ and all it contains?

The main inspiration was the way Stefano said the word “heavy” when asking me to write it, and the immediately following brainstorming, which went down like it happens when anomalies collide. Like a game of tennis with this ball made of steel going back and forth and each time it was a little bigger and weirder. All pretty automatic, like: “Hey, how about writing something fantasy for me?” “It will come out dark and weird, man, I warn you.” “I’d like it really heavy.” “With armored sharks?”

(Yes, it’s not in the preview, but Nublo rides an armored shark. With six legs. And a flying serpent). 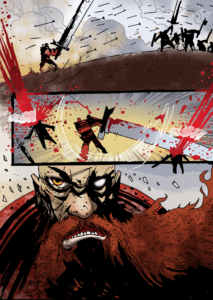 He is also drawing a beautiful comic, called Planet Caravan (coming out for Scout Comics this summer): it’s a science fiction story but it also has sword-wielding, armored warriors – which reminded me of Warhammer 40,000 – and that was an inspiration, too. I was also playing another nostalgic run of Dark Souls 2, and I guess it shows here and there. And I wanted to do something with big monsters. Like, really big. The first thing I did was a sketch of the King’s Beast.

Then I put a castle on its back. The rest followed – while on a three-day trip on a nearby, mostly wild island. As soon as I got back I called him with a full outline, and the tennis game resumed…

11. When it comes to Print vs. Digital, where do you stand?

I absolutely love having printed paper in my hands, and I like to buy my books in a store and read them on the beach. That feeling will never be equaled and I cherish my hardcovers. They’re the best possible present. That said, digital publishing makes it possible to reach so many readers all around the world, and at an affordable price (you can’t really buy all the great comics and books that come out). Plus, you can take them with you anywhere you go.

And it makes life possible for indie studios and publishers and all things non-mainstream. So, why “taking sides” for print or digital? If you like books, it’s great to have both options.

Editor’s Note: Unstoppable has successfully reached its funding goal of 1,692 dollars but don’t let that deter you from pledging and getting in on some of the awesome rewards and the GN itself!