Remember the good old days of the Saturday Morning Line Up of awesome cartoons and live action shows that one could find on both Fox Kids and Kids WB? Stuff that actually made getting up early on a Saturday morning actually worth it? Stuff that made it slightly hard to keep on just one channel thanks to the fact both had awesome shows on each and you had to flip back and forth in order to stay caught up? A bit like the Monday Night Wars back in the day between WCW and WWF/E? Which at my house, we were Team WCW all the way, baby! If you do remember this and miss the Hell out of those days as I do, then you’ll wanna follow along with this thought process of mine. As let’s face it, a lot of what you see on Cartoon Network these days is crap. Or, at least to me anyway since I watched it for the first time in awhile a few months ago and wasn’t impressed. 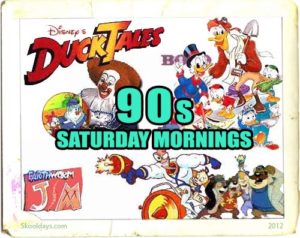 The time is obviously now to bring back the excellence of the Saturday Morning Line Up. Now, obviously, I’m not saying bring back old shows and run re-runs all the time aside from maybe one or two shows. But rather… Make use of some new content and with all the amazing comics out there now a days from publishers that aren’t the Big Two, there’s plenty to choose from for a brand new line up worth getting up at 6 or 7 in the morning for. And with that in mind, here’s a few titles I think would be perfect for kids, teens, and even adults to all enjoy together or separately!

The 7 to 8 hour can basically just be re-runs to help get you awake and pumped for the excellent shows ahead to come and entertain you. It could be any season of Power Rangers, Looney Tunes, Beetleborgs, VR Troopers, or any other show from agest past. And if you’re an adult whose up with their kid at this hour for the fun, you and your kid can bond over these old shows and young Benny or Tisha can have a nice perspective of shows of the past. If they are all that awake of course. Heck, you yourself as an adult could see something you might have missed from back in the day! 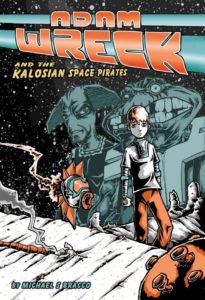 Now this could easily just be a single season only show for a new Saturday Morning Line Up, but it would be helpful nonetheless in getting things off the ground. From 8:00 to 8:30, kids, teenagers, and even adults could enjoy (and relate) this show about a kid stuck in outer space with his parents. Which makes it hard for young Adam to have any friends at all and only really has his parents to talk too. Well, that, and the no longer fun video games and the like after playing them for the billionth time! Space pirates, tentacled monsters, and a goat like Alien named Voric! Animators could even keep the black and white with some orange coloring here and there as well and that would be fun to see brought to the screen. But would this adaptation be animated or live action? And which do you think would work best? 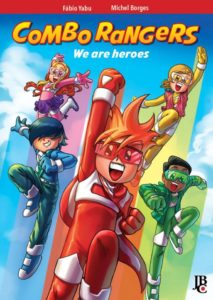 In a world where super powers are practically old news and heroes are forgotten because of it, Fabio’s Combo Rangers was an enjoyable read for me. And I think a comic about several kids coming together to fight evil in colorful Power Ranger like suits would be enjoyable to see on screen. Whether that’s animated or live action is another thing. This would also probably be another single season series unless Fabio chose to provide show runners with more content or gave them permission to do more. And if you were having a bad day the day before, this could even lift up your spirits some with its positive message about how there’s a hero in all of us. Of course a certain Principal’s hair style would probably have to be changed up in order to fit censorship guidelines but of course, I could always be wrong. 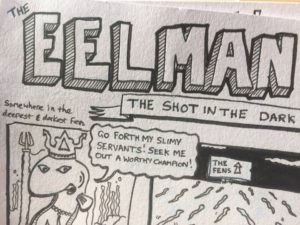 Now this might be an odd ball choice but I think it would be really fun to see on screen in either animated or live action style. I mean… How often do you see anything focused on Eel hunting or close to it? As with Chris’ Eelman Chronicles, the stories here are about the situations his father, Spalt Spalton, found himself in while Eel Hunting back in the day. This could easily go for more then a single season and never fail to entertain viewers with its wild happenings as Spalt attempts to find the Queen of Eels herself. Whether or not he actually did remains to be seen but would be fun to see on screen at some point. 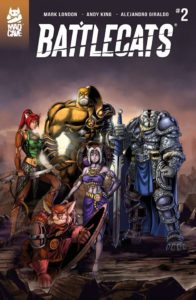 Only a crazy person doesn’t love the idea of walking, talking animal folk! Which is exactly what Battlecats features but they do more then just walk and talk, they kick butt with swords, wittyness, magic, and archery! The first season easily could be about the formation of the Battlecats world and how it leads up to the second season featuring Mighty Kelthan and his crew of kick butt cats. Maybe even giving each Lion Born three episodes a piece to flesh out their respective histories. There’s just a lot of ways this could go and it would be fun to see how it would all play out. And with the ‘Hunt For The Direbeast’ adaptation, adding some filler would probably be necessary so its not ending at six episodes. Though if this was to be done in live action, leave out the CGI and go old school with puppetry and the like.

It’d probably be slightly less expensive then CGI but I could always be wrong but would be great to see that sort of thing on a tv show again regardless. A deep, strong voice would be needed for Kelthan too. Michael Ironside maybe? James Earl Jones? Laurence Fishburne? I’ll leave that up to you! 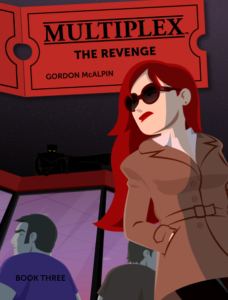 Now while this wouldn’t be for kids most likely unless it was toned down some for them, Multiplex would be fun to see on screen. If only because it would be entertaining to witness movie theater employees deal with movie goers they’d rather not deal with while quite happily expressing their opinion on a movie they themselves don’t like. And with three volumes so far, there would be plenty of content to make use of that would go past a single season. This would also be a fun way (for me at least) to witness Gordon’s work here for the first time by watching rather then reading. Of course I’d still definitely read the source material either way! 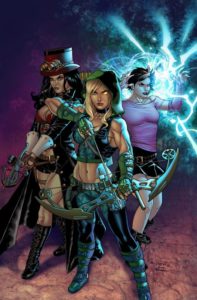 Now this would of course have to be toned down a little for audiences but Robyn Hood on screen would no doubt be awesome to see. Robyn’s a modern day badass version of Robin Hood. So fans of that character and young ladies everywhere would have themselves a role model in the form of Robyn Locksley. Those who know what its like bouncing from foster home to foster home would also be able to relate to her as well. And Robyn would probably be far less of a grouch then another certain archer on another show! With all the content that’s out there so far for Robyn Hood, we’d have enough for more than just one season. Unless of course the ones doing the show wanted to go another route for stories and the like. Along with the fact that in the comics, Robyn Hood is part of a shared universe, the show could easily spin off several other shows and that would be fun to witness.

Kind of like how Arrow did with Flash and now we have those two, plus Supergirl, Legends of Tomorrow, and Black Lightning. 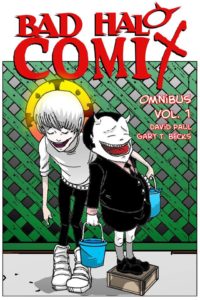 A modern day telling of a young Jesus and his step father doing all he can to raise the only son of God? What’s not to love about that!? Well… If you’re a hard core Religious type and hate anything that takes a different spin on Biblical characters then you might, but we’re not talking about that. We’re talking about Joseph, his step son Jesus, and a whole host of characters and zany situations that could go on for more then a season. Plus, Gary T. Becks’ art in animated form!? Hecks yeah, boys and girls! 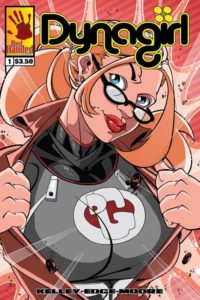 Well folks, its time to bring this to a close but not before I talk a little about Cary and Harold’s adaptation of the character Dynagirl from the 1970’s show ‘Electra Woman and Dyna Girl’. And in their version, she’s a single mom and a retired superhero until that kind of life brings her back into the game thanks to a company wanting to make use of her talents. This also has the potential to spawn a spin off or two and seeing Zig-Zag on screen would be too sweet in addition to this being able to go for more then one season. Some things would probably have to be toned down but otherwise, Dynagirl would make for a great addition to a Saturday Morning Line Up. Plus the potential for LGBT representation is very much there in Dynagirl, much like in Robyn Hood at a later time.