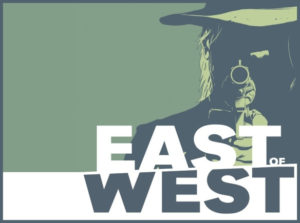 In case you have been living under a rock since 2013 East of West has been one of the best selling indie books on the market. The dystopian western is chockfull of style and well-paced story telling that delivers substance while still making the reader desire more. Hickman and Dragotta blend the Western and Sci-Fi genre in a fresh way that incorporates religious iconography and American folklore to build a world that is both interesting and dynamic. Looking back on the series I felt it would be beneficial to revisit volume one of the series entitled “The Promise”.

The opening scene establishes a supernatural subtext to the plot and characters. We are suddenly aware of the apocalyptic themes we are in store for. The premise is that of Death as a wandering gunslinger in a story of love and revenge. I have always found the Western and Sci-Fi genres to be conflicting in nature but the plot hits the right amount of western tropes that the sci-fi aesthetic works in a way that benefits the vision of the story. The sprawling wasteland of a futuristic fallen United States has its own version of history that loosely incorporates aspects of American history without too heavy of a hand. It establishes just enough to give you an understanding how the world is organized but allows it to remain mysterious enough to keep you captivated. The first volume accomplishes what it aims too while still delivering a story with twists and action.

The artwork by Dragotta is imaginative and engaging. The futuristic cityscapes and deserts really help to make every scene seem full. The panel layouts flow well and action scenes are arranged in a way that demand the readers focus. Martin’s coloring is also demonstrates that he is one of the best in the business as it really adds depth to every panel. Over all the artistic style really sets this book apart from others on the market. The choice of having Death as a plane which character to create contrast was inspired. I love the Pale Rider motif and it really helps bring a surrealist pop art feel to the book.

Overall “The Promise” is a lot of bang for your buck. It does the hard job of establishing a world by which a series needs to build off of in an innovative way. The story in this volume is simple but time tested and the characters touch just enough around the edges of each genre to create a delicate balance that works. Revisiting “The Promise” gave me a greater appreciation for the volumes that came after and really just goes to show how Image is still creating some of the most energetic series on comic shelves. 8/10

Summary: This is the world. It is not the one we wanted, but it is the one we deserved. The Four Horsemen of the Apocalypse roam the Earth, signaling the End Times for humanity, and our best hope for life, lies in DEATH.