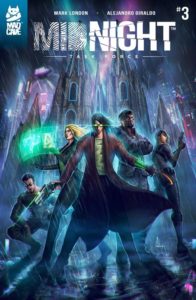 Hello my fellow Midnighters! I’m back, you’re back, we’re all back to rock out in Detroit til the Cows come home while Detective McCormick and friends do their thing to track down bad people who do some terrible things! Like take eyeballs from unfortunate people for example. And our fair Detective is definitely on the lucky side of things considering certain issues at the end of the second issue. With issue 3, its even more clearer that Mark London has taken time to thoroughly research Police/Detective Procedure when it comes to their kind of work. Or, you know, just watched a crap ton of CSI! Alejandro Giraldo’s art and colors continue to be fantastic in my view. Although, I wouldn’t have minded too much if the nudity shown here was a bit more revealing instead of censoring it in certain ways. Cause honestly, what’s the point in including it if you’re just going to censor it?

I get why in less mature books but if you’re intending a book like this for a more mature audience, shouldn’t need cover it up. Miss Black definitely seems like the kind of girl you enter into something with while ensuring you have a hefty life insurance policy in place! If only so that your loved ones will be okay financially in the event of your death. Issue 3, while pushing the plot forward, also continues to give us flashbacks to McCormick’s past. Which features the lovely vision of Mia MaKenna. Who as we get to see in this issue, has some friction going on with McCormick. Makes me curious to what exactly happened there in the past between those two! Something we’ll hopefully learn more of as time goes on! That is… If what happens near the end doesn’t cause some serious health issues. But, at least if the good Chief gets past all that, he can come clean with his wife about some of his naughty actions! Of course he’s liable to ignore McCormick’s advice on that whole situation but hopefully he doesn’t as that could just worsen things with his wife.

I can’t wait to see happens next after that lovely little cliffhanger Mark left us with. Thanks for that Mark! But the wait is sure to be worth it! So if you haven’t yet, get on down to the Mad Cave Studios site to get caught up on this and other MCS titles until the September 5th release of Midnight Task Force #3!

Summary: As old and new faces make their appearances to either help or be a hindrance, the case for Detective McCormick begins to take a deadlier turn!