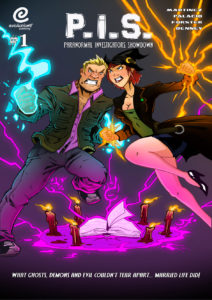 First off, I have to say that I enjoyed this a lot more then what I did Evoluzione/Guido Martinez’s other offering in the form of ‘Knight‘. As this felt more relaxed in its dialogue and isn’t an attempt at putting a hat (so to speak) into the Superhero genre. I like that this deals more with Supernatural elements, along with a fun twist involving former lovers who deal with Supernatural issues thanks to the fact they run their own separate P.I. firms that deal with the Supernatural. Well… When they aren’t at one another’s throats anyway! Gotta give props to Marty the muscle however, as its clear he’s been forced to deal with Phil (his friend and partner who is also the main character) and Phil’s ex-wife Sofia more times then he probably cares for! And while its clear Phil has some issues as we see a little of in flashbacks, its also clear he’s a bit immature.

At least where Sofia seems concerned if his little prank on her in the first few pages of this first issue is any indication! And it makes sense that she doesn’t wanna leave town to do Supernatural P.I. work elsewhere as she feels it would give Phil a win he more than likely doesn’t deserve. And I have to wonder about Marty, is he pure human who can use magic in interesting ways or is he half human? He’s darn good at diplomacy though where Phil and Sofia are concerned at least! Which is good for keeping business going at any rate! By the end of things however, it looks like our boys are about to be in for some serious business if the last few panels are anything to go by. And I can’t wait to find out how that plays out in the next issue! But will Sofia be able to help them out as it seems like she has a clue about things? Only Guido knows!

Editor’s Note: Interested in checking this out for yourselves? Head to the Evoluzione Publishing Facebook page to check out how you can acquire a copy! Issue 1 is also available on the Evoluzione’s IndyPlanet Page! Issue 2 is slated to be on there soon as well!

Summary: Phil Shallowhall and his partner Marty run a rather successful paranormal P.I. business. Phil possessing astral powers and capacities and Marty acting as the muscle. However, even in such a small market there is competition. Sofia Yanoni also runs a paranormal P.I. business. She is a very skillful witch, and just so happens to be Phil’s ex-wife. As they cross paths, they are bound to get on each other’s nerves. Just as any former couple would. So get ready to dive into a world of paranormal mystery, action, comedy, romance, and the drama the latter implies.