Our two heroes, Rusty McDoodle and Stan Munson, are dealing with problems. Rusty isn’t being paid for his work and his girlfriend left him. He’s also wearing a chicken suit but that doesn’t come up at all… Stan’s problem is the ultra responsive, self lubricating sex robot he created that was taken over by some sort of demon and tried to kill him.

While our two protagonists are busy trying to figure their lives out, we have a third character; an alcoholic psychic. While he just wants to go fishing with his buddy, a strange vision disturbs him so much that he has to cancel… Near the end of fishing season!!! Can you believe that?!?

You might have noticed that this book is a little bit weird, which is hard to pull off. A lot of comics, movies, books, and so on tend to look silly and pointless when the creators aim for weird. But Chicken Outfit is refreshingly weird. The tone and, in some ways, the content is very reminiscent of cartoons like The Tick, Beavis and Butthead, and Fritz the Cat.

It’s weird in a good way. None of the important elements, like story and character development, is lost in the rush to produce something crazy. Even the opening scene, with the killer sex robot demon… Thing… is well paced and doesn’t take longer than needed.

The plot itself is definitely interesting. A lot of questions are asked in this first issue that will, hopefully, be answered over time in a satisfactory way. What happened to the sex robot? What does the psychic’s crazy vision mean? Why does Rusty wear a chicken suit?

Of course, there’s always the risk that there’s a bit too much going on. It could become bloated, leaving very little room for the characters to develop. But based on this first issue, that’s not something I’m too worried about.

The art is pretty fantastic, too. Deagnon fills panels with so much detail; it’s worth reading more than once just to see what you missed. It’s similar to the likes of Ren and Stimpy but it has its own style and doesn’t look like a copy.

Every character has their own unique look, even those you only see for one panel. Every crazy thing pops out of the page and demands attention. It’s incredibly cartoony but that’s never a bad thing, right?

Deagnon and Stasyna know how to pace a story and keep things even. Nothing outstays its welcome here and everything moves forward. However… Can they keep that up? There’s always a chance that this first issue is just a fluke and that they may fall back on “weird” stereotypes. But I’m confident that this is a strong start to a strong book that will most likely be an underrated cult classic. Here’s hoping I’m wrong about it being underrated and they get the success they deserve!

I clearly recommend Chicken Outfit. But I can’t just recommend it to everybody; it’s not going to suit all tastes. I encourage you to at least try it out, even if the cartoon style and strange tone doesn’t normally suit you.

Editor’s Note: To grab yourself a copy of this title, head on over to the ComiXology page! Or even right here where you can find print as well!

Summary: Rusty McDoodle isn’t having the best week. His web clients aren’t paying, his girlfriend left him and his social skills have deteriorated from freelancing in a vacuum. His best friend Stan works in online porn, toiling away in a virtual sweat-shop lorded over by a maniacal boss and his dog-like cronies. When Stan’s latest project goes up flames late one night, he asks Rusty to join the company and help him uncover the truth behind his Kafkaesque employer. These two web-lackeys soon discover a series of events have been set in motion so bizarre, that their world is engulfed by epic chaos.

With the help of an alcoholic psychic and his fishing buddy, they’re roped into a nightmarish struggle with bloodthirsty demons and money-mongering yes-men. Can they keep their jobs and sanity intact when they can’t trust anyone and there’s an axe lurking behind every back? Chicken Outfit is a sci-fi / horror comic for future-shocked times. It chronicles corporate greed, maniacal butchers, undead biker-chicks, drunken psychic shaman, pretentious aliens and a couple of under-paid slobs who find themselves in the most hellish situation of their lives. 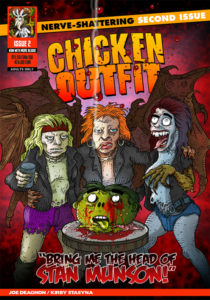 Summary: Web-Guy Rusty McDoodle goes back to his freelancing gigs while his buddy Stan trys to hide the horrific destruction of his basement studio experiment from his boss, Zigmund Danzig. Meanwhile, amidst the swirling reminder of his persistent visions, Headcast accompanies Billy to the lake for a relaxing fishing trip. The sportsmen head to their favourite pub for some sustenance, only to find the horrors of the city have bled into their idyllic country retreat. Soon, these four lads will realize there is nowhere to hide from the “Chicken Outfit”.

Join these two hapless slobs, Headcast the psychic, his fishing buddy Billy and their shit-house-rat-crazy, yet loveable megalomanic, boss into an adventure that will unhinge the doors of perception and stomp its way into your heart with a pair of blood-clotted, steel cleats.

Review: Not so very long ago, I reviewed the magnificent Chicken Outfit issue one by Joe Deagnon and Kirby Stasyna. But it was long enough ago that you probably forgot what happened! It has dribbled out of your head!

But, for any series, the second issue is a bit of a challenge, especially when the first issue starts so strongly. There’s always the risk that the first issue was just a fluke and that the creativity and energy can’t be re-created.

At the end of issue one, Rusty was sick of his life as a web designer and even more fed up of pining for his ex girlfriend. His best pal Munson, on the other hand, was incredibly worried about what to do with his evil sex robot. His evil sex robot that kind of has Cthulu qualities.

But this is not an ideal world.

Following the Psychic and his fishing buddy, we see more expansion of the universe of Chicken Outfit as we’re introduced to a gang of demon witches doubling as a biker gang. The introduction of the gang gets pretty darn messy, to say the least.

It’s just as wacky and creative as the first issue. There’s plenty of mayhem, swearing, crude sexual images, and more to keep everything nice and interesting.

But the story is also as interesting as before, with visions and monsters and unexplained chicken outfits. It’s great to see that the book isn’t losing any speed at all.

And the world that’s being built in this book is also fantastic. It’s creative and messy, full of monsters and other horrors.

Deagnon’s art has actually improved since the first issue. It was always manic and full of interesting details, but the line work is much tighter and more refined.

Deagnon and Stasyna have created an excellent book that should be in everyone’s collection, even if you’re not a fan of crude humour or insanity.

So, put your money in their bank account and read this comic book. It’s proven to prevent diseases like aardvark infestation, ankle acne, and over exaggerated magnetism. It’s essential.