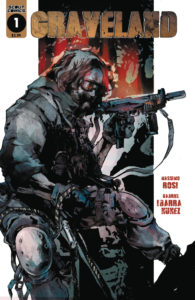 In Massimo Rosi’s Graveland, the people of Earth, well, mostly the state of California for the time being, has a very serious problem. A hugely serious problem in the form of a race of Giants that decided to come out from the San Andreas Fault and say hi. Of course, the way they do it isn’t all that nice unfortunately! How long ago this problem started up, isn’t exactly clear, but its easy to see they’ve made quite the impression since making their presence known to the world. I like that Mossimo Rosi didn’t start us off at the beginning of things and instead, threw us into what is basically the aftermath. Sure, it’d be nice to see things from the beginning but then again, that’s what flashbacks are for! Mossimo’s also painting us a lovely picture of the fact that the presence of the Giants is making for a desperate American Government as they do what they can to deal with the problem. And as we’ve seen in the past, sometimes, a desperate American Government isn’t exactly the greatest thing ever.

Especially since they’ll resort to any means necessary to deal with a problem and end up becoming worse then the problem itself. Gabriel Ibarra Nunez’ art, along with Marco Pagnotta’s colors, shows quite well the grim situation that’s seen in all three issues of Graveland. Unfortunately, Gabriel kinds makes it to where you can’t exactly see people all that clearly but the bit we see of the Giants shows just how damned ugly they are! The fact the art is like this, is something that has me wondering if Massimo clearly intended on it instead of going for a more clearer look. Now, what do you do when conventional means aren’t cutting it when dealing with a powerful threat from a history long forgotten but slightly warned of without anyone realizing it? Well, you resort to using Science and playing God to try and deal with the situation of course! Mayhap a lot of prayer would have done a better job but I guess we’ll never know for certain in the pages of Graveland. 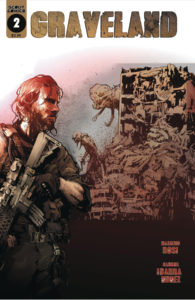 Some of you can probably already guess how that plan works out by the end of the first issue. Which allows us to meet one Titan Amon in the second issue. And boy is he not happy! But then again, who would be after being locked up for years by their own people just cause he didn’t toe the line as they would have preferred? Crazy people perhaps! Titan’s definitely got some power behind him and whether or not he succeeds where others have tried and failed remains to be seen. But as we see in issue 2 and in 3, he’s damned willing to do what it takes to get the job done. Even going into the belly of the beast so to speak just to learn more about the Giant problem. And you know… As I read through this again in order to do my review of Graveland, I couldn’t help but think that a younger Kurt Russell would be perfect to play the role of Titan Amon. Then again, he probably could still be perfect for the role if Graveland was chosen to become a movie. 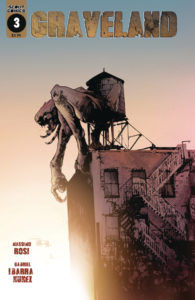 And as we readers see, its clear there’s more going on then a simple Earthquake stirring things up. Plus, helpfully showing just how far some will go just for a chance at revenge. Even if the cost is Humanity itself. Mossimo definitely has my attention with Graveland and I can’t wait to see what happens next and I think this would be a perfect title for those who like giant monsters. Of course there’s no giant robots however!

Summary: The San Andreas Fault finally has “the Big One,” but not from natural occurrences. From the depths of the fault something emerges. Something of myth and legend that was mentioned in hushed tone by every ancient culture – giants, huge creatures from another time, awakened from the slumber and seeking to resume their conquest that has been delayed for a millennium. To mount a counteroffensive, the US government creates super-humans with an experimental serum. These four individuals may be the last chance for humanity as they are all the stands between civilization and the Giants!