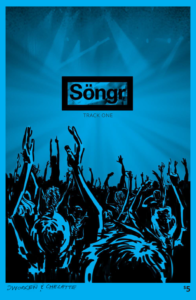 Arye Dworken and Anthony Chelette’s Songr is an interesting one in my view as its not necessarily a normal read. Nor are the two protagonists: Singer Sophie Quick and Music Column Writer Evan Rosen. Though while Evan’s admittedly something of a grouch when it comes to how he feels about music these days, he’s somewhat more likeable then what Sophie is. Its interesting to see Arye doing this considering his own past as a music journalist. Interesting but pretty fun to see what he’s coming up with here. Especially with how he comes up with the idea of the God known as Musik. Who it seems can look like either a man or a woman but I think Anthony Chelette intentionally did that with the character in an ambiguous manner.

Of course, given the fact that the last page of the book mentions that the site Evan works for focuses more on male talent then girl talent, is probably why Musik appeared to him as a woman like figure. Unlike how he did with Sophie. Who, in my opinion, is in severe need of being dropped down a few pegs from the high pedestal she put herself on.

Which as we see, seems to be an intention of Musik’s as he/she is NOT happy about the way that girl’s squandered her talents! Granted, Musik more then likely could have done far worse then what he/she ends up doing to Sophie and Evan in separate manners. Such as sending them to the world the God of Musik had created to teach them lessons known as Songr. Lessons that would hopefully humble (Sophie) and or restore a love of music inside of Evan. My not being too familiar with Led Zeppelin’s music made for an interesting situation thanks to the fact that Arye creatively uses one of their songs for a situation that Evan finds himself in. A situation that’s unique but quite fatally serious given the way things go soon after.

I could describe it more but I think its best for those who haven’t read the first issue of Songr to find out for themselves where that’s concerned. Led Zeppelin fans especially may or may not enjoy it!

Whether or not what all Evan goes through will help change him for the better remains to be seen. Though I look forward to seeing how long it takes for him to finally realize just how real everything is thanks to where he’s been sent too in Songr. The same goes for Sophie, who I wonder if she’ll have more page time in the next issue or perhaps equal page time as Evan while having what’s probably more of a rougher start compared to Evan’s start from the little that was shown near the end. Whether or not these two will meet is something I’m curious about as the story goes on. However long that may be for Arye and Anthony to tell their story involving our two lead characters. Speaking of Anthony, I have to say his art (no colors aside from the cover) is a bit… Rough looking to me.

I don’t know if this was done on purpose for the purposes of the story or what and if that’s the case, its an interesting decision to make. Perhaps its possible that as the story goes on, Anthony’s art will change. I don’t know for certain but it would be interesting to witness.

Especially if the more the characters improve their situations, the better things look. Maybe that’s what Arye and Anthony are going for and maybe not. As only they themselves know. The two have done a nice job in hooking me for their story in the first issue that thankfully had a short tale of an origin where Musik is concerned and then kept the story going. So if you’re the kind of person who loves it when music mixes with comics in interesting ways (especially after BOOM! Studios’ thrilling tale of Loki: Ragnarok and Roll for example), Songr may just be for you! And if you’re a fantasy fan, so much the better!

Summary; Sophie Quick and Evan Rosen, two very different individuals but both with a passion (or perhaps burnt or misused passion) for music are about to find themselves in a whole new world when the Goddess of Music decides to take action.