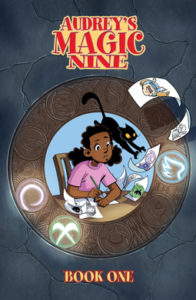 Penny-Farthing Productions in my view has done it again with another spectacular offering. And this time in the form of Audrey’s Magic Nine. A title I wasn’t sure of what to expect when I first began but instantly wanted more once I got to the 135th page and found there was no more. Much to my immense sadness. Have to admit though, certain parts near the beginning honestly managed to anger me cause of the things witnessed on the pages. Such as cruel foster parents and douche bag neighbors I wouldn’t ever dare call a friend. Much kudos to Michelle Wright for causing me to feel that way nearly right out the gate as I began this. And while this is meant for kids, its also meant more for those who’ve experienced the adoption life for better or not so better. And in this tale of an adoption story, we meet little Audrey. Who’s got quite the skilled talent for drawing at such a young age! Heck, makes me rather envious too! Anytime you see her art, its like a comic within a comic and that’s pretty great.

Audrey’s art is basically her get away and its both beautiful and sad. Beautiful cause of what she creates but sad cause of why she does it. Though I am rather curious over how long she spends in a bathtub before she gets found by a Police Officer near the beginning of this story. I’m also wondering about the kids Audrey was with at the beginning. And if whether or not they too ended up in some good places after that Hellhole. I’d certainly hope they would have as they no doubt deserve it! Now, while I love the Hinkle family for being so willing to adopt Audrey, and not even let the fact she’s not white stop them. The fact that they are doing it for the wrong reasons (for the most part anyway) is an issue. I get wanting to fit in, but using a kid to do it? Especially one who’s had it not so easy so far? Just isn’t the way to do it and I really hope they realize that sooner then later before its too late. But I’ve got faith Michelle will handle that in a pretty good way as time goes on. 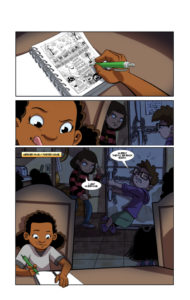 However that may be, I am definitely looking forward to it! Courtney Huddleston, Frabcesco Gerbino, and Tracy Baily all do wonderful jobs in this book with their respective duties. And I personally hope they are on board for the rest of the series, for however long that may be as I’m not sure anyone else could quite manage to achieve the way they’ve managed to bring this book to life. Audrey’s Magic Nine has that children’s book feel to it cause of this team of Michelle’s and I love it. Though she definitely gets you questioning a few things later on in the story. Especially where Audrey and her puppet friends are concerned. Now this isn’t a bad thing, far from it as it makes things interesting and quite fun to witness where Audrey and the puppets are concerned. But there is the potential for some sadness if its just something that’s really gotten away from her while getting a bit lost in her art making. 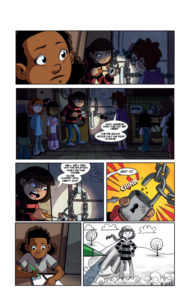 But its easy to see why she may have gotten lost in her art making but that potential heart breaking moment is what worries me. If there is one anyway. And just what is that mysterious sound Audrey keeps hearing anyway!? Way to keep the suspense going there Michelle! Folks, I could keep going on about this book, but that would ruin things for you guys and I don’t want to do that. So I implore to y’all to get your hands on this amazing read and end up loving it by the time you’re done. Read it with anyone you know for that matter!

Summary: The only thing more enchanting than twelve-year old Audrey’s precocious artistic talent is moxie so formidable that not even a broken foster care system, ambitious adoptive parents, or terrifying show people can defeat it. Armed with her trusty sketchbook and a magical, fuzzy friend, this plucky heroine sets out on a quest to find all the members of a legendary council devoted to erasing the evil between earth and a mysterious realm. Featuring over 140, full-color pages and bonus short stories, Audrey’s Magic Nine is a fanciful, all-ages treatise on the power of the imagination.