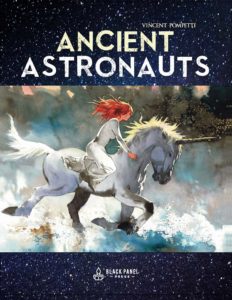 Ancient Astronauts is a new original graphic novel from comic creator, watercolor painter, and illustrator Vincent Pompetti. At 162 story pages long, and accompanied by many extras that dive into the background of the worlds introduced within this story, the book is definitely hefty enough to warrant its price. On top of that it’s a gorgeous book as well, but we’ll get into the art side of things in a bit.

Ultimately, the tale is about bringing together disparate cultures by showing them the good that lies within us all. And how if we simply come together through kind thoughts and love, instead of hatred and power we can achieve and experience so much more. This is no better illustrated than in a scene where our heroes use an Akash Stone – a stone material that lets one see a vision of their possible selves – to show the materialistic worlds we all live in, the higher plane of existence out of reach by us normally due to what lies in the middle: negative subconscious thoughts.

The literal translation goes a long way to specifically illustrate what kind of message Vincent is hoping readers walk away with once they’ve finished this book. And to his credit, it’s a completely admirable desire to have. Though at times the story does feel preachy about the subject, which is one of the major problems I did have with the book on a story level. Everything is, unfortunately, overwritten and nothing is left to subtlety. 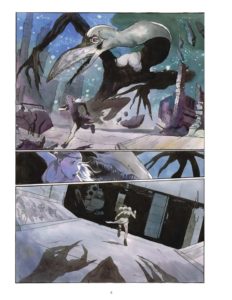 The dialogue very rarely feels natural and the answers often come fast and with complete transparency. One character’s epiphany is at least two or three lines of dialogue explaining it in great detail. Even the first page that introduces us to this world is tells us stuff we don’t really need to know about the world of Plaine. Instead of, it is therefore it exists, the philosophy is really it is, therefore let me tell you everything about it.

Now, I’m not trying to discourage you from reading the book. Personally, I did not enjoy constantly being told everything in great detail and following characters that happened to just know everything or so it felt like. But that does not mean this book wasn’t worth my time. The characters, really, are all delightful. Onys, our main hero, is naive and charming. She’s adventurous and is quite open-minded. She wishes only the freedom to express herself, something her father world never allow.

Yulunga, the woman on the cover of the book, is fascinating. She’s sort of all-powerful but allows for many of the characters to accomplish tasks in their own way rather than step in dramatically. She only uses her vast abilities a few times and the ability to reign oneself in like she is able to do is truly marvelous to watch. 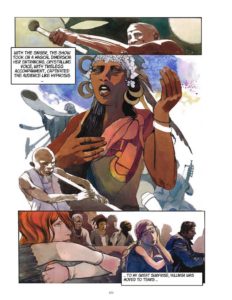 On top of all of this, the cultures Pompetti have built are incredible to say the least. Inspired by the real world idea of our ancient cultures being visited by beings that helps shape them with similar building blocks despite the cultures never having met with one another, Pompetti pulls from these very same cultures to create truly unique worlds that I for one would personally love to visit.

It’s apparent in the art alone that Pompetti truly enjoyed working on this book and though I feel like the dialogue and the storytelling could use much in the way of polishing, the art is astoundingly gorgeous. Completely painted by watercolor, Pompetti is really on full display with his love and affection for both created stories and the real stories they draw from. 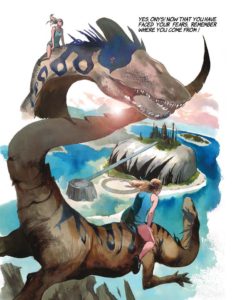 This book is worth it for the art alone.

Ancient Astronauts isn’t a perfect book. For all its faults it also has some high points. I never felt bored or dissatisfied with it, and everything I wish had been ironed out I’ve already talked about up top. It’s a pretty easy read, overall, and was a fun to dig my teeth into regardless of omniscient characters or events. We don’t get a lot of high stakes European books over here in the States all that often so it’s nice to see that changing and this book is just one of a few leading the charge.

We exist in a world bombarded my mainstream superhero stories. It’s refreshing to see something that is anything but every now and then.
Final Score: 3.5 Cultures at War out 5

Editor’s Note: Ancient Astronauts is available in both print and digital formats! Head here to grab yourself a copy!

Synopsis: In the infinite cosmos are scattered millions of galaxies. Lost among them, a world similar to ours develops in its own solar system. On Plaine, a highly developed planet-nation, the opening reveals Onys, a young and daring archer. She emerges from sleep, short of breath, alerted by a dangerous presence lingering around her. An imperceptible but undeniable entity, defying the laws of physics, manifesting itself like a cloud of smoke, almost palpable. A presence whose mysterious nature would soon rock her senses and shake her perceptions of reality.

The sudden arrival of Yulunga, the astonishing shaman, will open the doors to a universe wholly unexpected by the young Onys. A place where the interpretation of what is real is commanded by the subconscious. A place at the center of which, the laws of nature are defied by the power of the mind.

What if, since the beginning of time, there was something else? Maybe, it was the world of Ancient Astronauts.