Well, Martin continues his trip down memory lane here and I have to say that anyone who has either done something crazy, met someone special or had an opportunity pass them by and has lived to regret not knowing if that was meant to be or not this is totally something you can relate to. It’s such a personal story he’s telling and that it is so gosh darn relateable to captures the body, mind and soul of the reader.

While I’ve enjoyed Martin’s storytelling with his other projects it’s this one that resonates the most with me. He’s got such a fluid way with words and being honest in his approach to storytelling. Also this is kind of like that fantasy come true in that Trey runs out of Thanksgiving leaving his wife behind and takes off for parts unknown to be with the girl who upended his life once and whom he never got out of his system. Who hasn’t wanted to chuck it all and see if what was is indeed what was meant to be? Also that he’s never felt more alive than when he was with her that doesn’t hurt either. 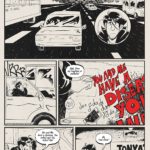 Don’t let these interiors fool you either. While it has that almost underground comix vibe and feel to it and in a lot of ways is cutesy it really has some great emotion to it. The use of page layouts through their angles, perspective and even the use of backgrounds really make this story so, not cute but cute. While the then and now storytelling is easily discernible here the use of colour in the past really does make it even more effective.

The characterisation here is wonderful to see and that it’s like we’ve all known, met or have these people in our lives–or have had them in our lives at some point in time–makes it even more delightful. While we also shy away from strangers these days sometimes it pays to open yourself up to them and maybe just maybe find some of that intuition that people have to help you along your way. It’s one thing to go off on a crazy quest and question your actions but to have someone come along and say hey live, love and learn never hurts. 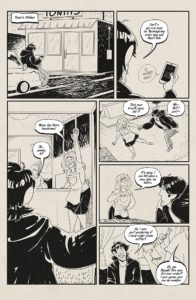 I keep saying that these small, indie published books are so worth the time and effort for you to find them and it’s books like this that keep me shouting that out loud. Its got this charm and personality that you just can’t find anywhere else point blank, period!

Editor’s Note: Interested in checking out this title for yourself? Then head right here!

Summary: With the drama of Thanksgiving dinner at his back, Trey hits the road hoping to avoid any more conflict from home. His journey down Highway 75 leads him to meet some colorful characters in a small Georgia Diner. Madison attempts to confront Trey about his swift exit and where he is going. Trey blames it on his work and that he is expected at the Atlanta “GorgonCon”.