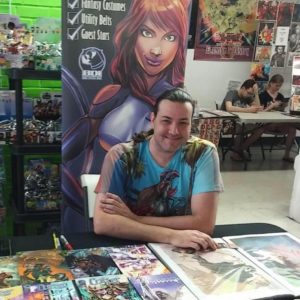 Its a wild Tom!

1. Hello there! And welcome to the Mind Meld! For those who may not know the name of Tom Hutchison, Big Dog Ink, Penny For Your Soul, Ursa Minor, Critter, and quite a few other sweet titles, what can you tell us about yourself?

I’m the founder and publisher of Big Dog Ink Comics and the writer and creator of all the titles listed. I also serve as the art director/editor, convention sales member and more. Big Dog Ink is the culmination of a life long love of comics books.

2. Among the things you and the BDI team are currently up too, ‘Lights… Camera… Jungle!’ certainly has an interesting premise to it. What can fans expect to see from the series? Will it be a mini-series or a long term title?

Lights…Camera…Jungle! is a very different type of story for me. It’s less fantasy based and more reality based. It focuses on real people doing real things within the Hollywood sphere of influence and their dealings their with cast members and the paparazzi too. This was the first time I co-created something with an artist and Jeneveive Broomall and I put a lot of time and effort into finding a story that was fun and clearly filled with potential for it to continue. I would assume we could get a good 5 volumes out of the book at least.

Pre-sales have been great. Those that missed the Kickstarter campaign have jumped on board and supported Jen and I, and the book, of course. We are both really excited to finally have this book out to the backers and the BDI fans in general, too!

4. If memory serves me correctly, you were looking into doing a project called ‘Kaiju Epic’, what ever came of that?

Kaiju Epic! was also a successfully funded Kickstarter that is almost finished as well. Just working on colors and letters and should be to print a couple weeks after Lights…Camera…Jungle! Kaiju is another different kind of story for me. Yeah it’s still fantasy with the giant monsters and so on, but there’s really no cheesecake or pinups etc for this book. Yeah there’s a couple girls in lead roles, but my portion of the story also features a mostly male led cast. Kari Castor’s half is a mixed group of kids who have a different monster to deal with in England. Two stories, different locations, different characters, and a ton of monster fun!

5. Would you say its somewhat difficult doing two different stories in the same title or not that difficult at all?

Not at all. In the case of Jungle, I get to write a story about people, the cast, and then a story about the fantasy of the tv show those people are filming. It works very well and quite easily. With Kaiju, even though im not writing both sides of the book, it would again be a situation where both stories work together and help expand the character base and the universe in a quicker fashion while letting the writer(s) really dive into a complete world of monsters rather than focus on a single city or country like most kaiju movies have to do.

6. How long of a run do you hope ‘Kaiju Epic’ will have? Or is it a one and done type title?

Kaiju is planned to have 5 of these 48 page volumes. With luck, at that point, we will take the book to being a monthly series of some kind as we have had our series become in the past. 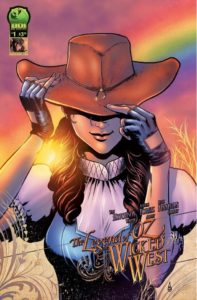 7. Sometime ago, BDI became part of the Aspen family, has that worked out exactly as hoped it would?

Not totally, but it certainly hasn’t been a failed experiment either. Blending two active comic producing entities is not an easy thing. But Aspen has been wonderful with me and my creations and has put a lot of extra eyes on us that we didn’t have before. That was the whole point really. The comic book retail market is so saturated with product that we were simply being overlooked and needed a little step up in the eyes of retailers. That’s exactly what we got.

8. ‘Penny For Your Soul’ has been making something of a come back recently and I for one am excited about it. What’s next for the cast from PFYS?

A reunion/relaunch event is planned for October 14-15 in Phoenix AZ at Jesse James Comics. Penny has been a book people have asked about for years since our Aspen merger, but even more so in the last 6 months for some reason. That got the juices flowing and Jesse and I have come up with a plan to get the book back up and running and doing so with a live in store event with 7 artists that are Penny alums or new additions who will be working on the next volume. More details will be sent out soon!

9. When the first issue of ‘Penny For Your Soul’ came out back in June 2010, did you ever think the series would come as far as it has now that its about to have a 4th volume?

I had hoped so, but honestly at the time I had no idea what to expect. I had no idea if anyone was even going to care about it. But it was an almost immediate thumbs up from readers and critics alike. Yeah there are a handful of reviews that just looked at Penny as a T and A book and didn’t get into the meat of the story, but most critiques were very thoughtfully written and positive. That always makes someone feel good, obviously, so I’m really excited to get back to the series and get this story told and finished! 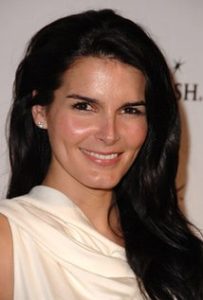 10. Who would you fancast for a live action adaptation of PFYS?

I have no idea. I haven’t even considered the idea, to be honest. The cast is so vast it would be hard to figure out where to even start. But as I answer these questions and think about it, I’m kind of loving the idea of Angie Harmon as Danica!

11. As you went and turned ‘Ursa Minor’ from a comic to a novel, what gave you the idea to do so?

Basically… I had time. As we were reprinting a lot of the BDI stuff through Aspen, I didn’t have as much writing I needed to be doing. So I decided to teach myself to write in prose format and figured it would make my life easier if I didn’t have to create a story while learning a new writing format. I knew I had extra story to add in, however, and so Ursa Minor was a great starting point for me. And the book has gotten great reviews overall. It’s not some epic 800 page thing, its a fun 250 page horror story that’s a fast, fun read. Exactly what I intended it to be.

12. Huh, Angie Harmon would be interesting to see in the role of Danica! And is there more plans where ‘Ursa Minor’ is concerned?

There are plans for all BDI books to be returning to publication within the next year or so. One step at a time right now, and Penny for Your Soul is on deck.

13. You mentioned the comic book retail market being pretty saturated with product, what do you think could be done to reduce the saturation?

Nothing. You can’t simply tell people not to create companies and sell product. That’s the free market system. The only thing you can do as a comic book producer is find your own way within the industry. Find your own place and make it work for you. The traditional method of distribution has been broken for a long time and it’s not changing anytime soon. But buyers habits are changing and the ones to recognize that and move to work closer with their buyers are the ones that will succeed.

14. Of the many talented folks in the comic making world, who is someone you would love to work with that you haven’t yet?

I have a few people at the top of my bucket list. Starting with Art Adams. That’s the dream. But Sharing that top spot is Todd McFarlane. That’s a tough get, lol! After those guys, I’d love to write something for Joe Benitez to draw. There’s a guy who comes straight from my visual storytelling thought process. I think we’d rule the world if we worked together!

15. If given the chance to turn any one of your creations into a video game, which one would it be and why?

Honestly I don’t play video games. That doesn’t mean Im not open to this happening, but I’d rather try to get a Critter animated series to happen than a video game. 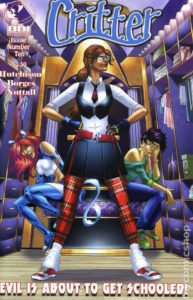 16. With the Aspen deal that helped to bring in new readers, this seemed to cause something of a halt to newer content for titles like ‘Critter’ aside from a re-master of the first issue with some additional content included. When can fans expect to see the series continued again if it isn’t already?

We had to reprint that material to be able to engage the Aspen audience and show them who we are. That slowed things down for sure. But as I’ve said… There’s a lot going on in these last 6 months of the year, so be sure to watch social media for the announcements!

17. You and Joe Benitez working together would be pretty darn sweet actually! If a Critter animated series was to happen, would it stay close to the source material or veer off some to be original somewhat?

I’m honestly never a fan of straight up adaptions of comics into movies or tv. To me, I’ve seen that stuff already and I want something new. But with Critter, 99% of the world would have no idea about any of her stories so we could very easily create stories that are new enough for our existing readers but be able to use the comic book basics that the rest of the audience hasn’t seen.

18. If you could go back and do anything different with your titles, would you?

Nope. I think the order the books came out and the initial bi-monthly schedule made things optimal for us and retailers and fans who found us along the way.

19. Where do you hope to see BDI within the next 5 years?

I’m more focusing on the next 3 years. I’d like to have a really nice tenth anniversary with all our books back in print and rolling along. I’d like to maybe get some aspect of toys or card games or something to go along with our stories. I want to see people wearing BDI shirts at shows and asking for BDI characters for their art commissions from artists. I want to build something that the BDI alum will be proud of and something that our readers/collectors are proud to support and be a part of. Our fans are everything to us, and it’s time to get back to focusing on them!

20. And as for my final question, what advice would you give to those looking to get into comics making or just starting out in it?

That’s too vague to give any real answer. There’s too many aspects of the industry to talk about. But bottom line is this: if you want to be in comics, then do it. Write, draw, ink, color letter…whatever it takes to put your work in front of more people which will get you more work. Just do it, as the saying goes!

Excellent! Many thanks for taking part in this Tom! And good luck to all you do! I know I’ll be watching! Stay tuned to the BDI Facebook page to catch all the awesome updates right here!