Martian Lit is proud to release the debut issue of Lazarus, the Forever Man! The 24-page zero issue reprints the Lazarus stories from Martian Comics, in preparation for his ongoing series!

The series stars the Biblical Lazarus, and tracks his adventures after being resurrected 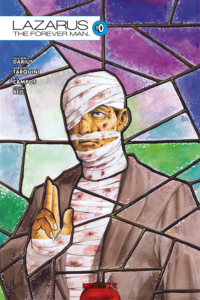 by a Jesus possessed by a Martian.

The comic is priced at only $0.99. It’s written by Julian Darius, with art by Sergio Tarquini and colors by R. L. Campos.

The issue is available on ComiXology now! If you prefer a DRM-free PDF of the comic, it’s available here.

You can learn more about the entire series on its webpage and on Facebook.

Lazarus, the Forever Man is our fourth comics title, after Martian Comics, Kimot Ren, and Necropolitan.